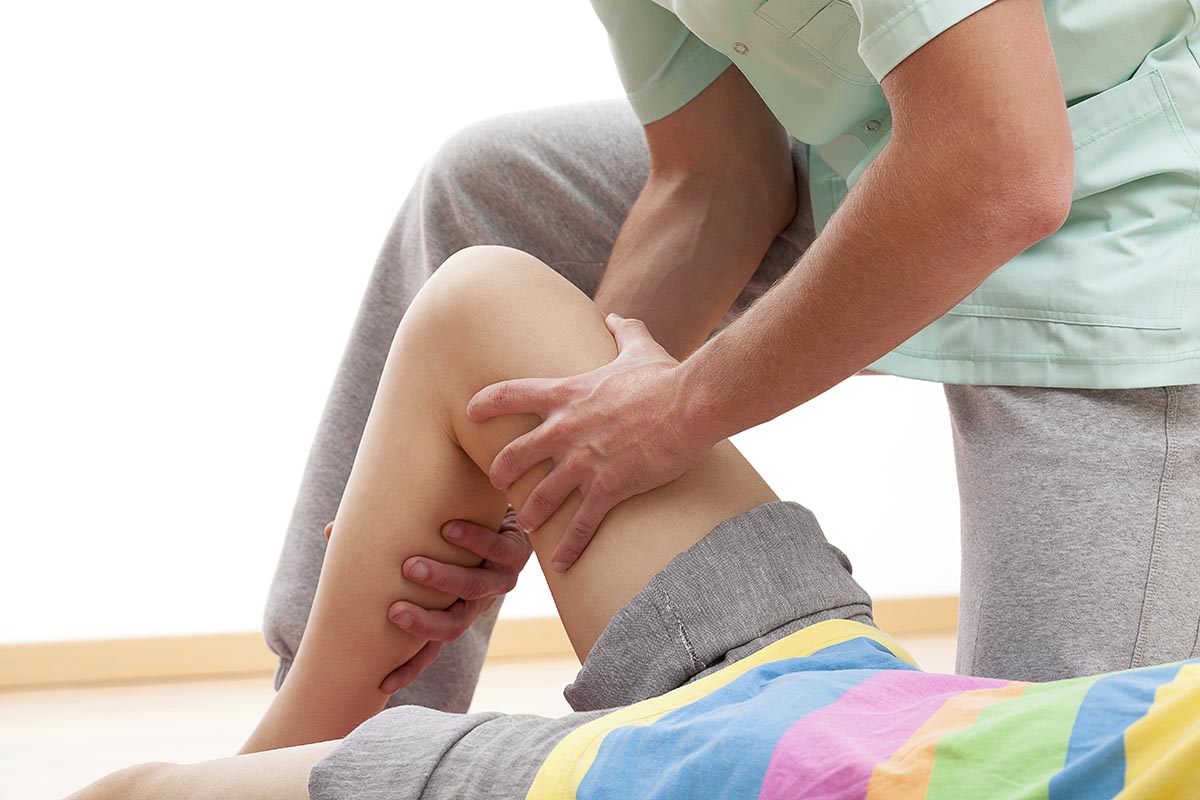 When knee pain is not just knee pain

By FitPro TeamAugust 14, 2015No Comments

Home » When knee pain is not just knee pain

Knee pain can be caused by a number of factors – and it doesn’t always just ‘go away’ with rest. Thuy Bridges investigates.

There are many causes of medial knee pain and an incorrect diagnosis may inadvertently lead to poor management of symptoms and a delayed recovery. This article will look at pes anserine bursitis: the ‘other’ knee pain.

Pes anserine is the anatomical term used to identify where the tendons of gracilis, sartorius and semitendinosus muscles attach to the tibia, just below the knee. The word literally means ‘goose foot’, as it describes the appearance of these three tendons at the attachment point. The pes anserine bursa provides a lubricant/buffer between the ligament and the tendons.

How does it occur?

The three muscles mentioned above are primarily flexors of the knee and also induce internal tibial rotation, protecting the knee against rotary and valgus stress. Bursitis arises due to undue stress being placed on the area where these muscles attach. Overuse of the hamstrings in runners with particularly tight hamstrings is common in cases of pes anserine bursitis. In addition to trauma, sudden changes in training, improper training, ‘cutting’ training (exercise performed in a sideways motion that places a high lateral strain on the knee) and running up hills can contribute to the condition. The bursa becomes irritable and inflamed with the inappropriate load and becomes a source of medial (inner) knee symptoms. The incidence of pes anserine bursitis increases with obesity, in older individuals with arthritis and in women more so than men because of the increased angulation at the hip and knees due to the broader pelvis. Genu valgum (knock-knees) and pes planus (fallen arches or ‘flat feet’) may predispose the individual to medial knee problems and degeneration of the knee is frequently associated with pes anserine bursitis.

Local pain is usually reported at the location of the bursa itself (where the muscles attach to the tibia) and palpation of the joint line above the bursa should reveal no pain (unless there is another active condition). The bursa itself is usually not palpable unless effusion and thickening are present; however, the attachment site of the muscle can be easily found by palpating the tendon of the semitendinosus muscle and following it to its insertion onto the tibia. Usually, no pain is reproduced with flexion and extension alone; however, resisted internal rotation and resisted flexion of the knee may provoke symptoms. Valgus stress (outward movement of the lower leg with the knee stabilised) may reproduce pain and mimic medial collateral ligament (MCL) injuries. However, if the pain is actually MCL-related, then this is usually posterior and superior (behind and higher) to the pes anserine. Proximal swelling in the pes anserine tendons may indicate active tendonitis and a snapping of the tendons may occur.

Initial management aims to reduce symptoms. Once the three primary muscles (gracilis, sartorius and semitendinosus) are tested for length and strength, the appropriate taping (lengthening or strengthening), soft tissue work or other modality is provided relative to these muscles. By being specific with regards to the muscles that are most significantly contributing to the problem, it is possible to provide maximal relief in the shortest time.

Once symptoms are reduced to a manageable level, the next step is to assess the primary cause as to why the muscles and the bursa may be symptomatic (i.e., what is happening to cause the dysfunction in the first place). Training intensity, training type, footwear, weight gain, joint deterioration, antagonist muscle activity and body alignment may need to be considered for more comprehensive management.

The client is complaining of medial knee pain and swelling is noticed under the knee joint line on the inner leg, which is also tender to the touch. Strength testing of the hamstrings reproduces the most pain (and also identifies the muscle to be weak) but length testing indicates that it is also tight. Management can start with taping to manage the swelling, using lymphatic taping and additional Kinesio taping to lengthen the semitendinosus. This can be complemented with soft tissue work to allow for the sliding of adjacent muscles above the knee. Strength work is not necessary at this point, as the weakness identified by the testing is likely to be secondary to the length deficit and symptoms. It is also unnecessary to deep tissue massage an irritable bursa. Training can start to involve fascial stretching techniques and load may need to be modified to reduce cutting (sideways motion exercises), hills and other activities that load the hamstrings excessively. 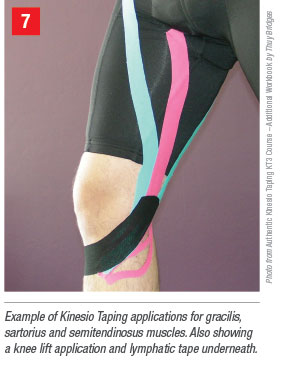 At subsequent sessions, the question of why the hamstrings may be overloaded should be considered, and the gluteus maximus and calf muscles, which are involved as a functional chain with the hamstring, should be assessed. Additionally, the antagonist quadriceps can be assessed. If the quadriceps are dysfunctional, the hamstrings may be working against this tension. If dysfunction is discovered, then it is appropriate to target these muscles in training. Kinesio strength taping is applied to the hamstrings once the length of the muscle has been restored and if the muscle is still found to be weak when tested. At this point, with the muscle supported by the tape, it is appropriate to commence a programme based on strengthening with load. Ultimately, the client is transitioned back to normal training loads.

Thuy (pronounced Twee) Bridges is the director of PhysioWISE physiotherapy and Pilates clinics in Sydney. A certified Kinesio taping instructor and an Anatomy Trains associate teacher, she incorporates her thorough understanding of the theoretical models of the human body into practical, effective treatments. physiowise.com.au

This article was first published in Australian Network magazine, autumn 2015.