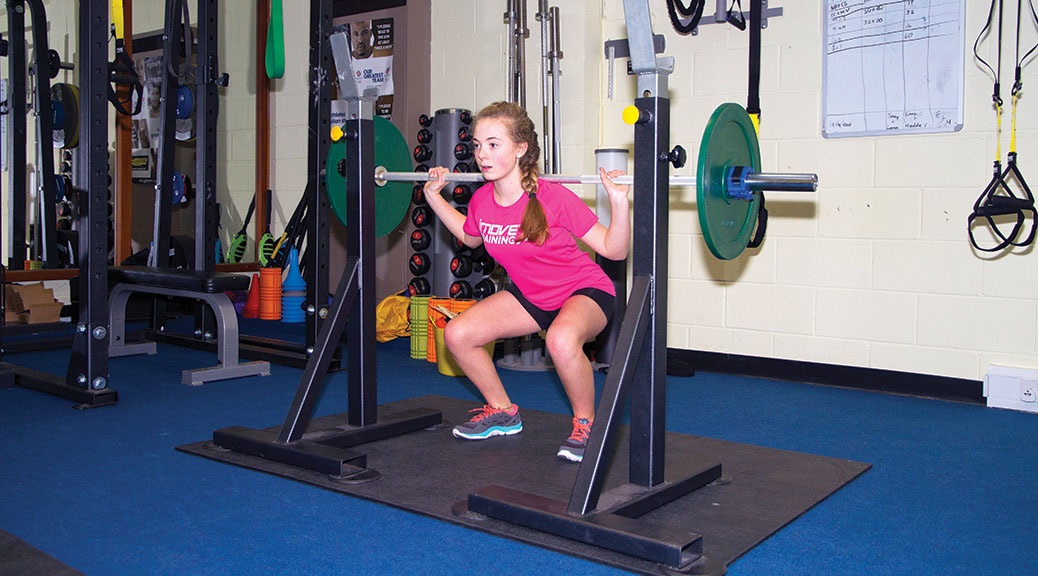 David Parker explains why Olympic weightlifting is a beneficial and suitable activity for children and adolescents.

This summer, the world’s best Olympic weightlifters will compete for gold in the 2016 Olympic Games in Brazil. Non-competitive Olympic weightlifting has increased in participation1 and many younger people are taking up the activity. However, should children and adolescents be exposed to Olympic lifting? I believe the answer is yes. Evidence is supportive that Olympic-style lifting is safe and beneficial when supervised by a suitably qualified professional. However, negative connotations and considerable controversy still surrounds weightlifting, probably due to a lack of understanding and televised images of men and women lifting two or three times their bodyweight over their heads. Furthermore, potential risks, including growth plate fractures, muscle strains and abnormal physical changes to younger participants, mean Olympic lifting for this population should be considered carefully. Evidence for the efficacy of weight training (not to be confused with weightlifting) in children and adolescents is well established, leading to all the major global strength and conditioning authorities – namely the National Strength and Conditioning Association (NSCA)2, Australian Strength and Conditioning Association (ASCA)3, United Kingdom Strength and Conditioning Association (UKSCA)4 and the British Association of Sport and Exercise Sciences (BASES)5 – releasing position statements in support of weight or resistance training activities for children and adolescents. However, what about Olympic weightlifting?

The UKSCA position statement is inclusive of weightlifting and concludes, “Weightlifting is considerably safer for children and adolescents than many have generally believed, providing qualified supervision and instruction are available and progression is based on the technical performance of each lift.” Recently, a position statement on youth resistance training – the 2014 National Consensus6 – made resistance training inclusive of weightlifting activities for children and adolescents and, furthermore, it is supported by global exercise science, physical education and paediatric medicine organisations.

Weighing up the risk

Olympic weightlifting movements are explosive and performed with a high degree of technical skill, whereas classic weight training exercises, such as squats and deadlifts, are performed at a controlled movement speed and are relatively easy to learn. So, are weightlifting exercises riskier than traditional resistance exercises and other sports activities for young people? Although it requires greater skill and more time to learn the techniques, it appears that Olympic weightlifting in the presence of a suitably qualified fitness professional is generally safe and can be practised without risk of injury7, 8, 9, 10. The main considerations when including Olympic weightlifting movements in a programme for children and adolescents centre on their safety and well-being. However, recent research suggests that injury rates in young people’s weightlifting activities are low.

Using a questionnaire, Hamill7 studied the differences in injury rates among school children (primarily aged 13-16 years) in a range of sports, including football, rugby, basketball, cricket, athletics and field hockey, along with weightlifting and weight training in UK schools. The results demonstrated that, per 100 hours of participation, weight training and weightlifting generated fewer injuries. Hamill explains the potential reason for the low injury occurrence – that weightlifting is a complex skill requiring a high coach:participant ratio and low resistances in order to learn at first. He concludes that weightlifting is safer than participation in many other sports, certainly when supervised by qualified instructors.

Byrd et al11 followed 11 young (three females, eight males) US weightlifters (the youngest was aged 11 and had been weightlifting from age nine) for a minimum of 22 months. All subjects increased their lifting totals in the snatch and clean and jerk. Although the sample size was small, the researchers reported a lack of injuries over 534 competitive lifts and loss of training time. The research team concludes that, although the issue of injury requires ongoing scientific research, on the present data they believe children should not avoid intense resistive training; however, they say, “We do not suggest that resistive training or weightlifting is appropriate for children without being supervised by well-trained and educated coaches.” In another study, Myer and colleagues12 evaluated resistance training-related injuries presented to US emergency rooms by age, type and mechanism of injury in youths versus adults over a three-year period. It should be noted, however, that the researchers did not distinguish between weightlifting and weight training activities in order to assess whether there is a difference in injury rate and mechanisms between the two. The researchers hypothesised that adults would sustain a greater percentage of joint sprains and muscle strains, whereas younger athletes would sustain more accidental injuries. Injuries were classified as ‘accidental’ if caused by dropping weights on their fingers and toes, misuse of equipment and tripping/falling. The study findings indicate that children have a lower risk of resistance training-related joint sprains and muscle strains than adults. The majority of youth resistance training injuries are the result of accidents that are potentially preventable with increased supervision and stricter safety guidelines.

The best age to start

According to Faigenbaum13 there is no minimum age requirement for performing the snatch and the clean and jerk. He states that children should have the emotional maturity to follow directions and adhere to safety considerations. Therefore, maturity and cognitive capacity is probably a better marker than chronological age alone to assess when a child should start lifting. It is important for the child’s safety and well-being that they are responsible and able to concentrate on instructions given by the coach. Older children (aged 10+) generally have better cognitive abilities than younger children, although chronological age is deemed a weak indicator of maturational status.4

Recently, Lloyd et al10 have provided useful guidelines for coaches and fitness professionals, allowing a structured and logical progression model that integrates weightlifting exercises in training programmes of children as young as six and adolescents in a safe and effective manner. Lloyd and colleagues’ four-stage Weightlifting Progression Model10 is simple to implement. For children aged six to nine, the emphasis is on improving fundamental weightlifting skills (stage 1). This includes a variety of jumping, landing, skipping, crawling, bodyweight and mobility exercises – key not just for the gym or sport, but for life. When starting any lifting programme, activities should be non-specific and general all-round development is best for long-term performance. As technique and cognitive capacity develop, weightlifting exercises (stage 2, aged nine to 12) and derivatives can be added, with the emphasis on improving technical execution. What Lloyd and colleagues do advise is that, no matter what the child’s age, they must start with the first stage. For example, a sedentary 14 year old may not possess the basic movement skills, so would start at stage 1. Using my own criteria, what is required is a respect for the gym environment and the coach, and also the ability to accept discipline. From my own experience, children aged nine to 11 are better able to understand the importance of paying close attention to coaching instructions and following them, while understanding the consequences that, if they do not, they could get hurt or hurt others. The weight room is no playground and not all children will be suitable for my entry criteria. Age is not set in stone, as children develop at different rates and stages.

As the research continues to dispel the myth that Olympic weightlifting presents a danger to children and adolescents, health clubs and schools could grasp the opportunity to offer supervised progressive sessions. Unfortunately, health clubs often restrict children’s access to the gym, particularly under the age of 14. This is a shame, as fitness facilities are in the perfect position to offer a safe and supervised environment with qualified trainers. As most mainstream health clubs are not geared up for children’s weightlifting activities, schools and privately run fitness studios are best placed. Since today’s children are not as active as they should be and many don’t enjoy sport, non-competitive Olympic weightlifting could provide the alternative to get kids active, encourage regular participation and help form exercise habits to carry into adulthood. The weightlifting environment may be a strategy to get sedentary children more active, as it offers a relatively safe environment free from the pressures of competition and a place to develop confidence and personal success. For a child with an aptitude for sport, however, weightlifting can build strength and power in the lower body to improve jumping ability.

Assess the child’s readiness to participate

Children must be cognitively developed to be able to follow instructions and understand the safety requirements of lifting. How I assess readiness is through observation: does the child treat the gym like a playground? If they are off swinging on equipment and cannot follow instructions, then they are not ready. Maturity and cognitive ability varies widely among the ages and a single child can drastically change the dynamics and safety of your session.

Focus on technique, not numbers

Learning proper technique is essential. When children under 10 are judged competitively, the focus is on technical merit rather than the amount of weight lifted. This is a good guide for all Olympic lifting coaching with this age group.

Wooden dowel rods can be a good place to start, as they are light and give a feeling of holding a bar; when the basic movements have been practised, try a 5kg or 10kg training bar with a 25mm bar diameter to add a bit of load. Light 1.5-5kg Olympic training plates are useful, and lockjaw collars rather than spring collars are easy to use to secure weight. If purpose-designed weightlifting shoes are not available, footwear with a firm sole should be used.

In order to ensure workout effectiveness, personal safety and the safety of others, create the good lifting environment and set the rules of engagement. For instance, participants must wait for the coach before starting the session. Only lift in designated areas and do not cross/walk over lifting areas.

This may seem common sense but you should get qualified in Olympic lifting instruction through a governing body such as British Weightlifting or the UK Strength and Conditioning Association.

For references mentioned in this article visit fitpro.com/references

David Parker is the owner of IMOVE Training and Education, specialising in youth physical development. He is a qualified Level 2 British weightlifting coach, personal trainer and a TRX national master trainer.