With the London Marathon just around the corner, tapering is now well underway for this year’s runners. However, if you’re left feeling inspired for next year’s event, or your client has a marathon later in the year, take a glance over Human Kinetics running suggestions. 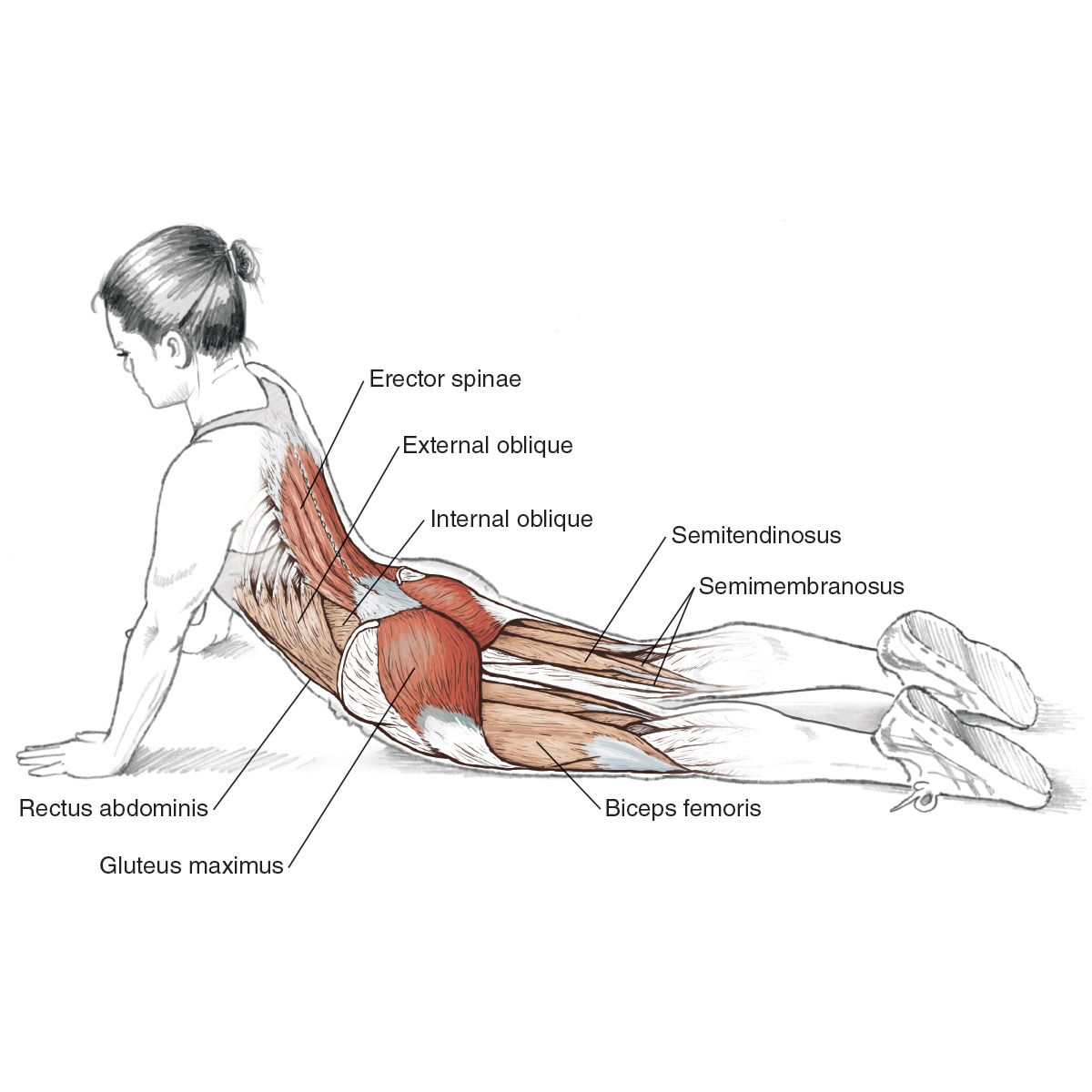 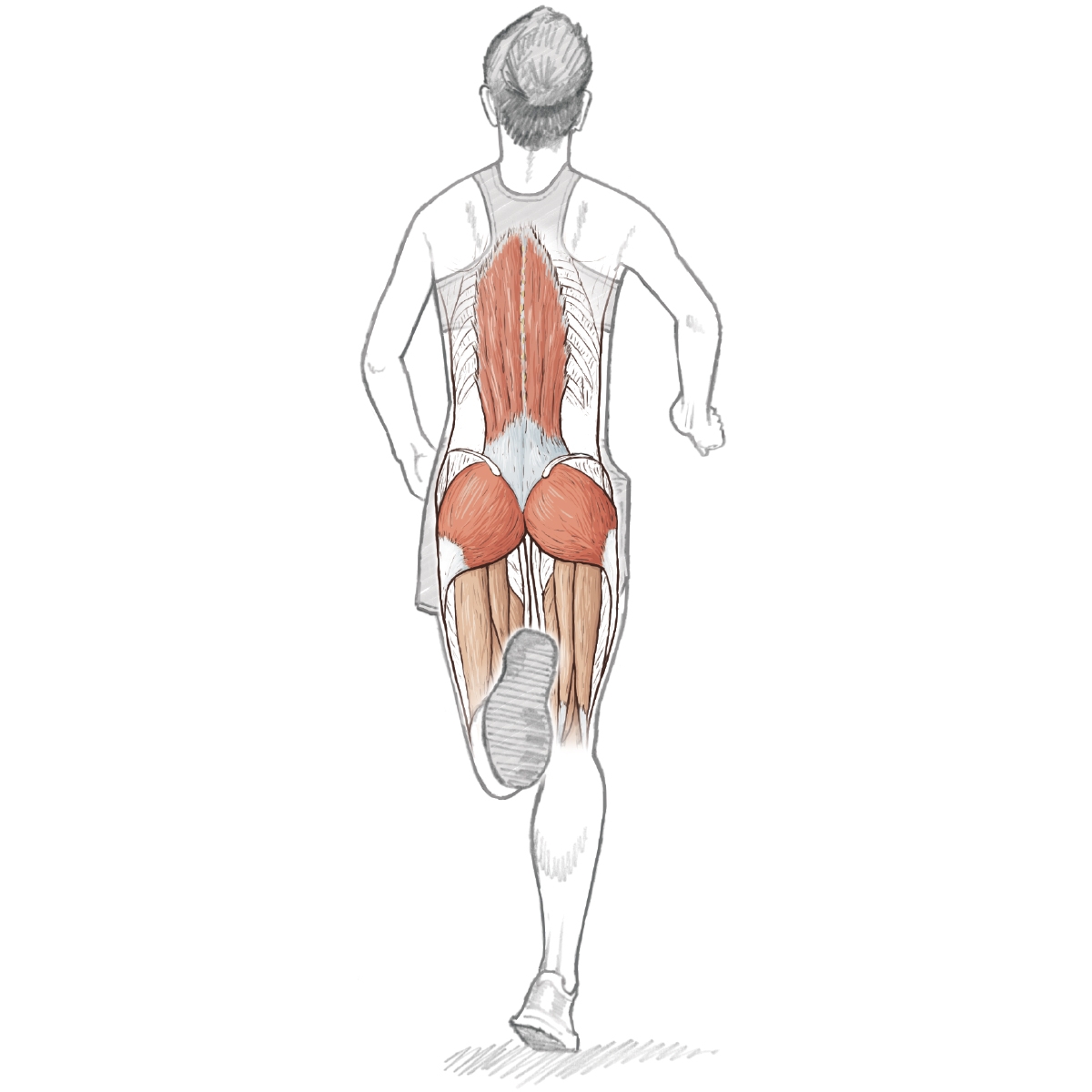 This is a very simple exercise that should not be confused with the push-up. It helps strengthen the muscles and tendons of the erector spinae; the antagonists for the rectus abdominis muscle. The exercise also strengthens and stretches the support structure of the sacral and lumbar spine. In this way, it helps the pelvis rotate and twist properly, and mitigates forward tilt of the pelvis, which can result from performing too many abdominal strengthening exercises and can lead to imbalance between the abdominals and the muscles of the lower back.

Unfortunately, emphasising the core exercises sometimes devolves into emphasising the abdominals to the near exclusion of the glutes and the lower-back muscles. In the absence of strong glutes and a supportive lower back, the hamstrings may be unable to generate sufficient muscular power, despite their having been strengthened properly. Essentially, the strongest muscles are only as strong as the weakest link in the kinetic chain allows them to be.

Proper movement of the pelvis is critical in the gait cycle. Pelvic misalignment, which may result from imbalance between the abdominal muscles and the lower-back muscles, can cause injuries that impede running performance despite good cardiothoracic fitness. 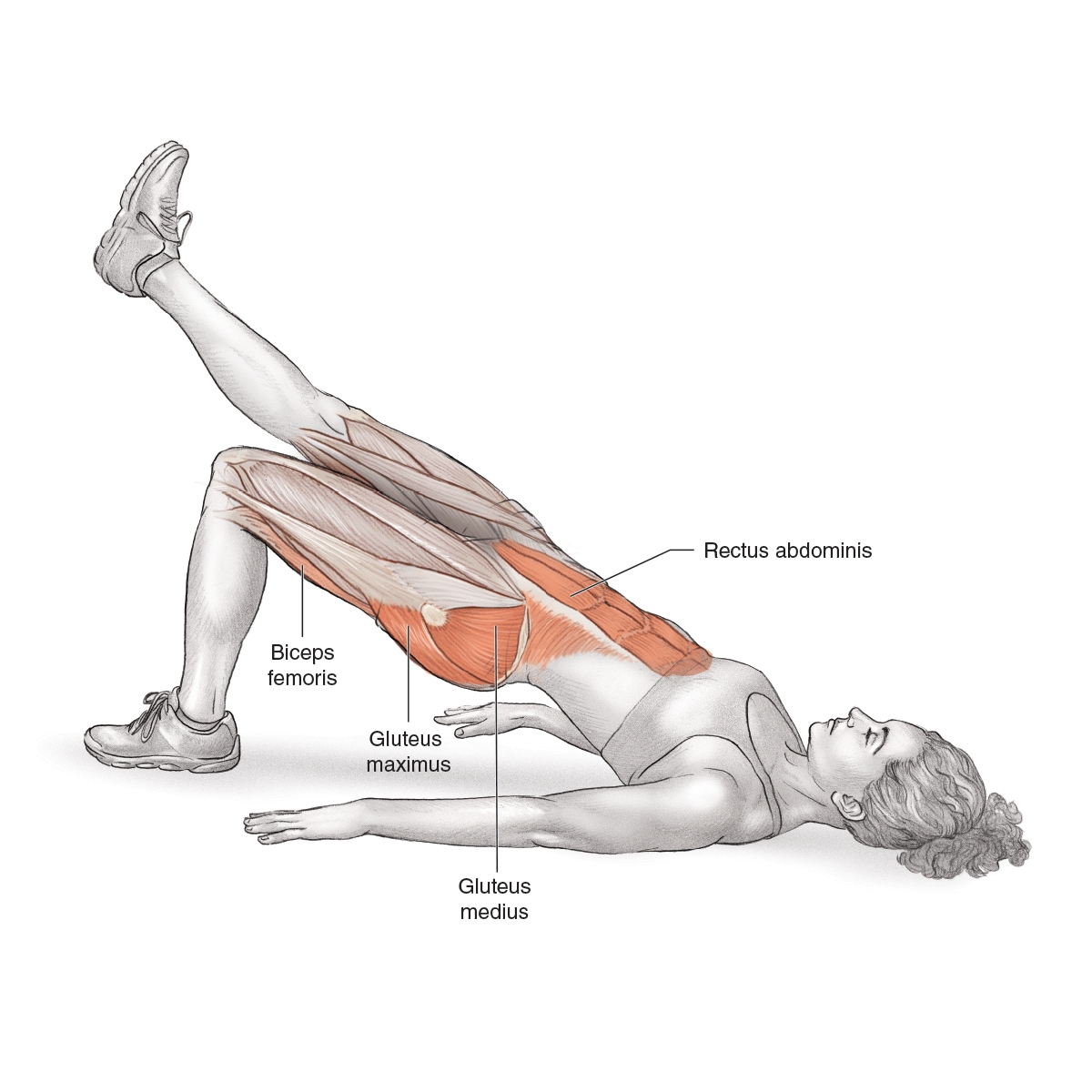 Maintain full extension in the bridge position (don’t let the core sag) while slowly raising and lowering each leg. Raise to full extension without hyperextending.

As mentioned in the introduction to these exercises, a runner who has weak glutes – or a problem with glute ‘firing’ patterns – requires other muscles to assume the responsibility of the glutes. Ideally, even for distance runners, the glutes (not the quadriceps) should serve as the powerhouse of lower-body strength. However, since this exercise uses only bodyweight, it primarily develops the firing of the muscle. In other words, strength development is secondary, therefore, bridges can be complemented by squat exercises that focus on developing strength. 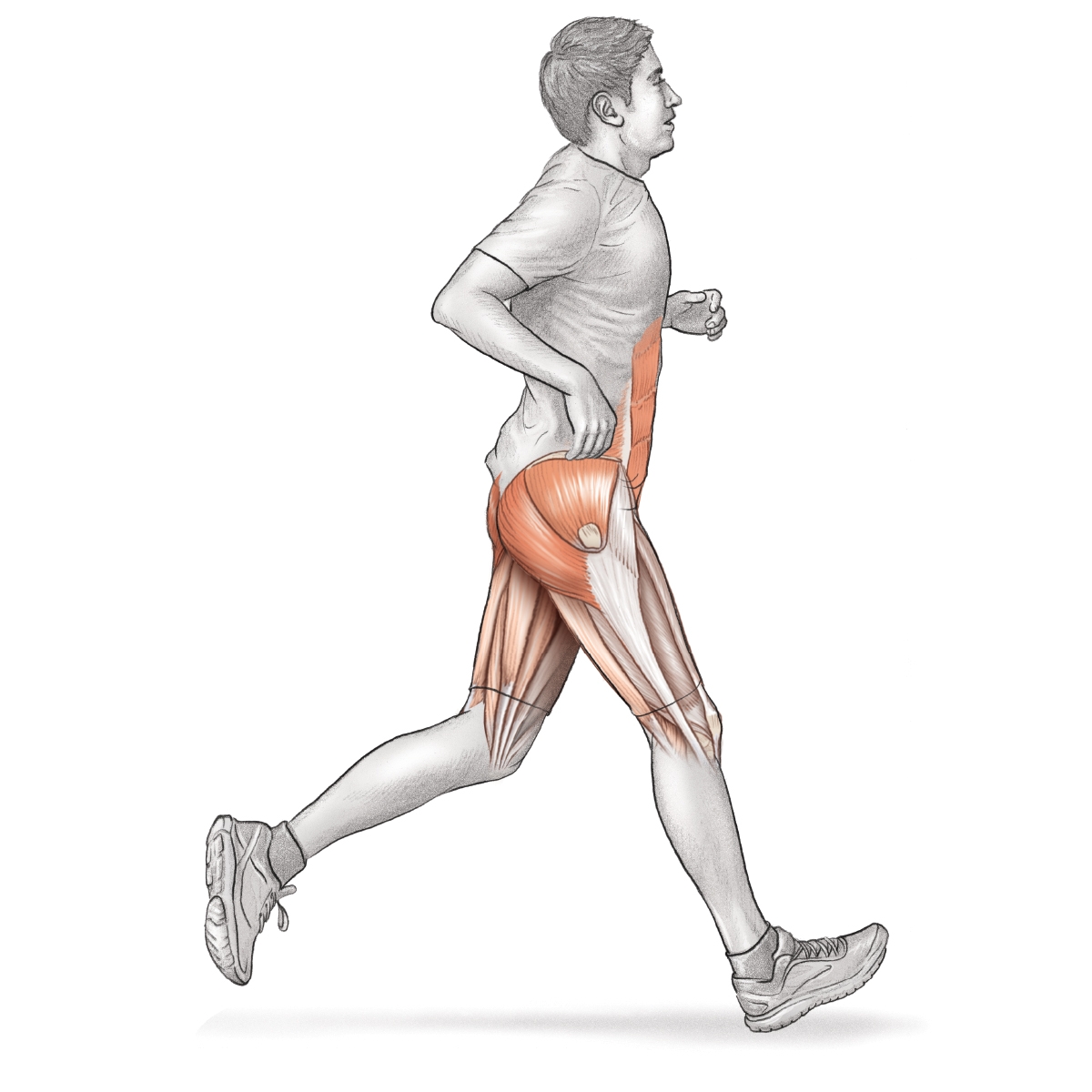 Assume the bridge position with the legs bent and a dumbbell resting on the front of each upper thigh (anterior hip). Perform the exercise in the usual manner with the dumbbell increasing the resistance. 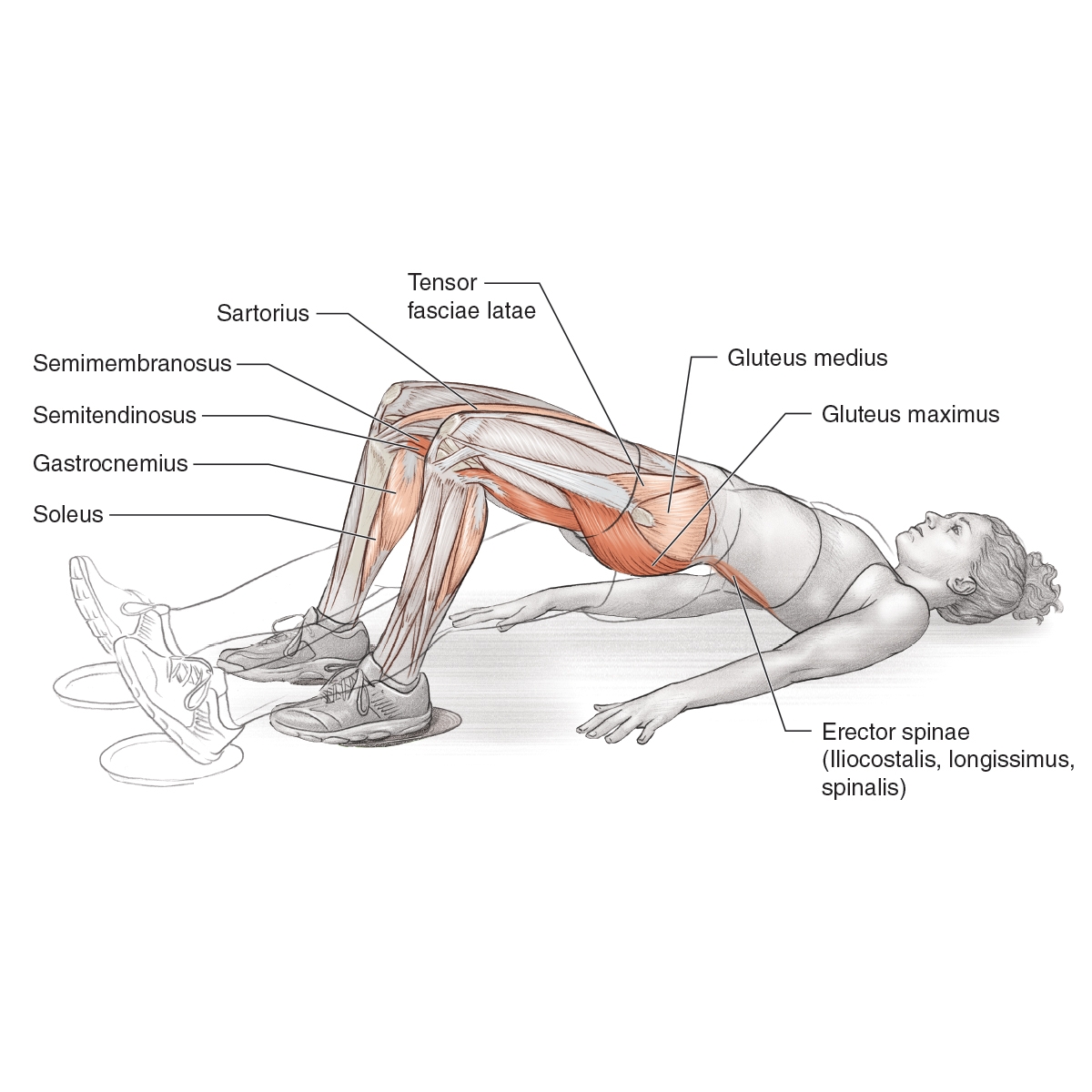 Keep the shoulders and head on the floor. 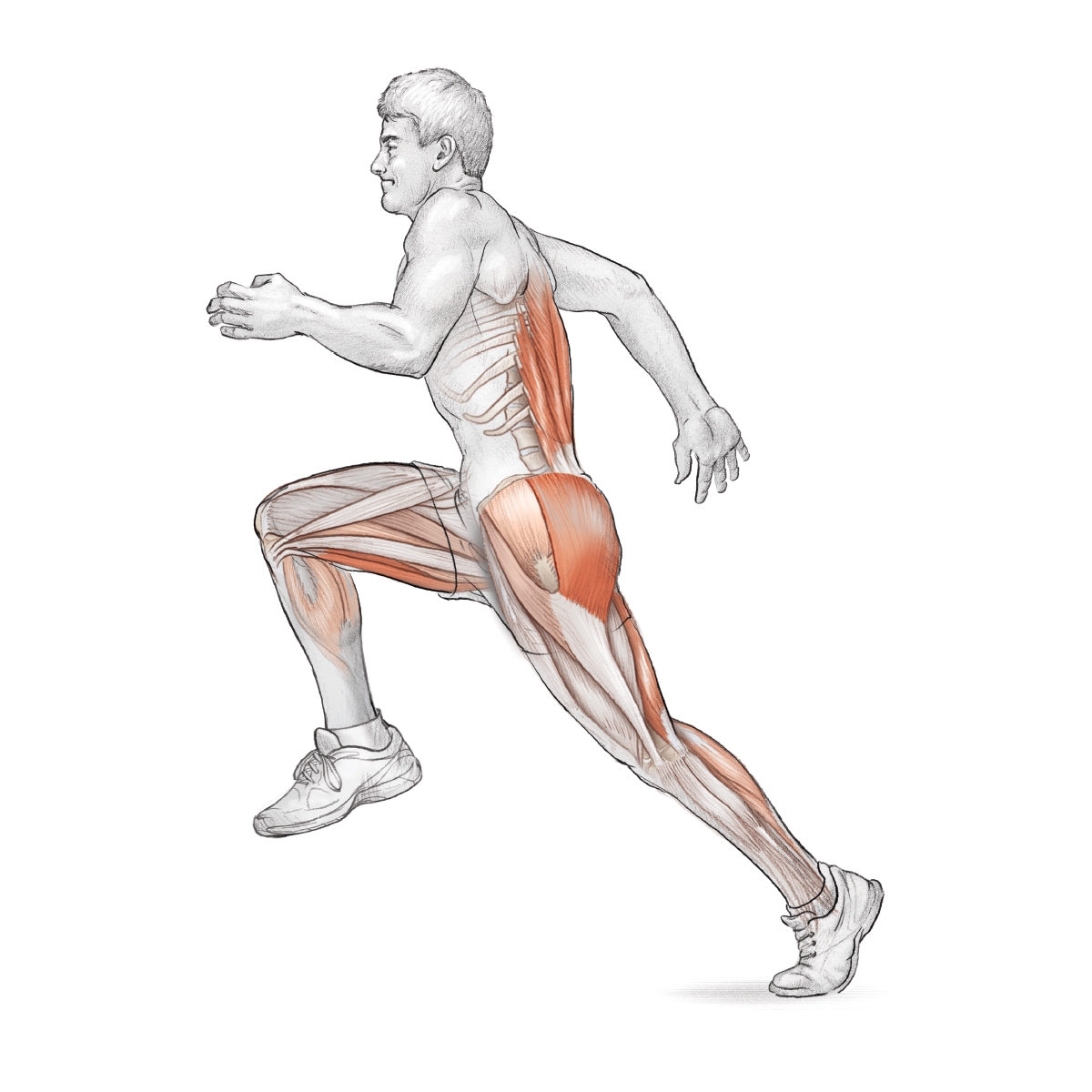 The sliding leg curl is a posterior chain exercise that emphasises both knee and hip flexion (in contrast, the hamstring curl works only knee flexion). This exercise is preferable to other, less functional hamstring exercises because it also requires core stabilisation. The ultimate position attained is full extension, which mimics the body position used while running. 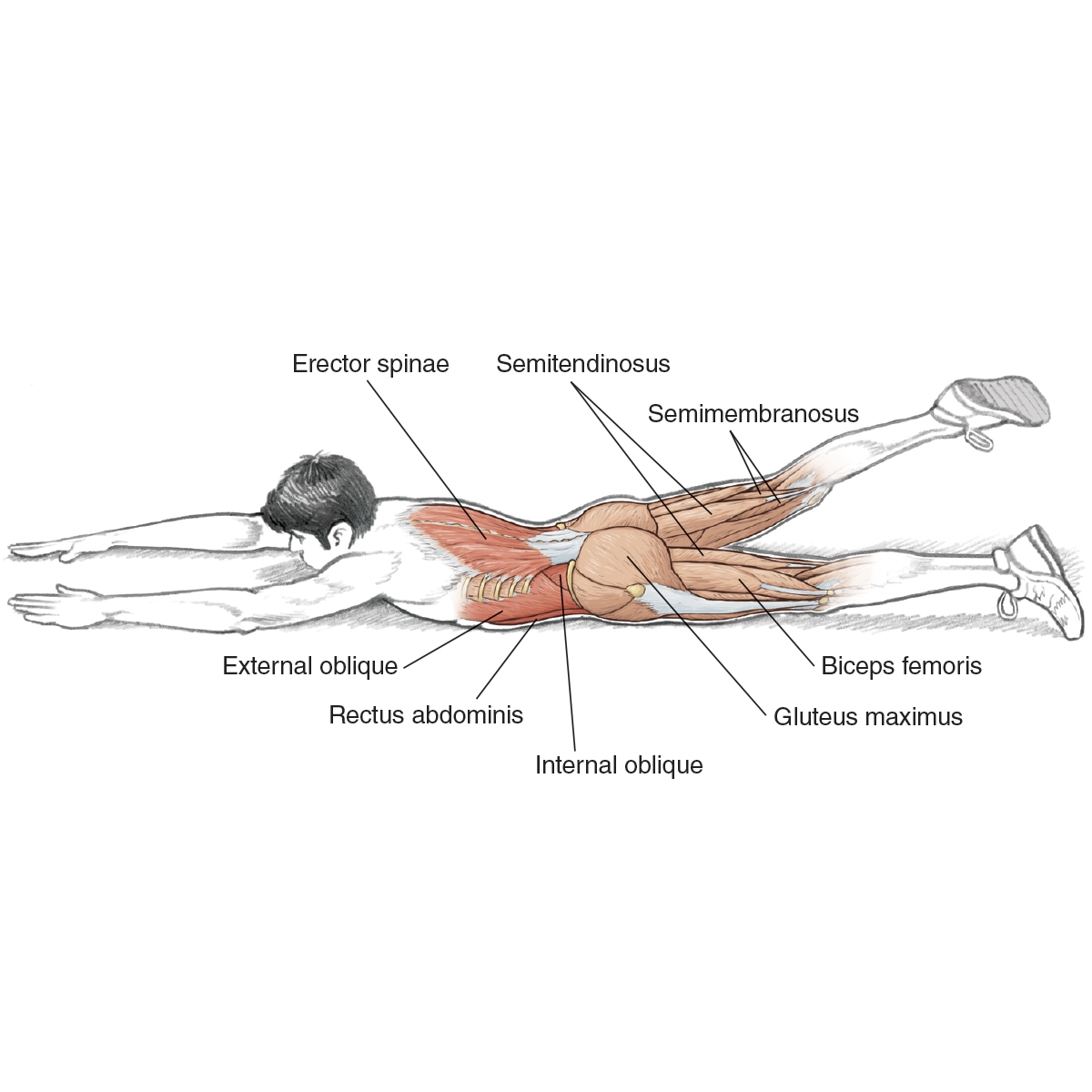 This exercise can also be performed on a Roman chair, in which case gravity plays a greater role in increasing resistance. Of course, Roman chairs are rarely around when you need them, and performing this exercise on the floor works just as well. All of the movement should be generated by the glutes and the muscles of the lower back.

Performing this exercise requires hyperextension of the back. Typically, this is not a problem, but for runners with chronic back pain or disc issues, press-ups are safer. 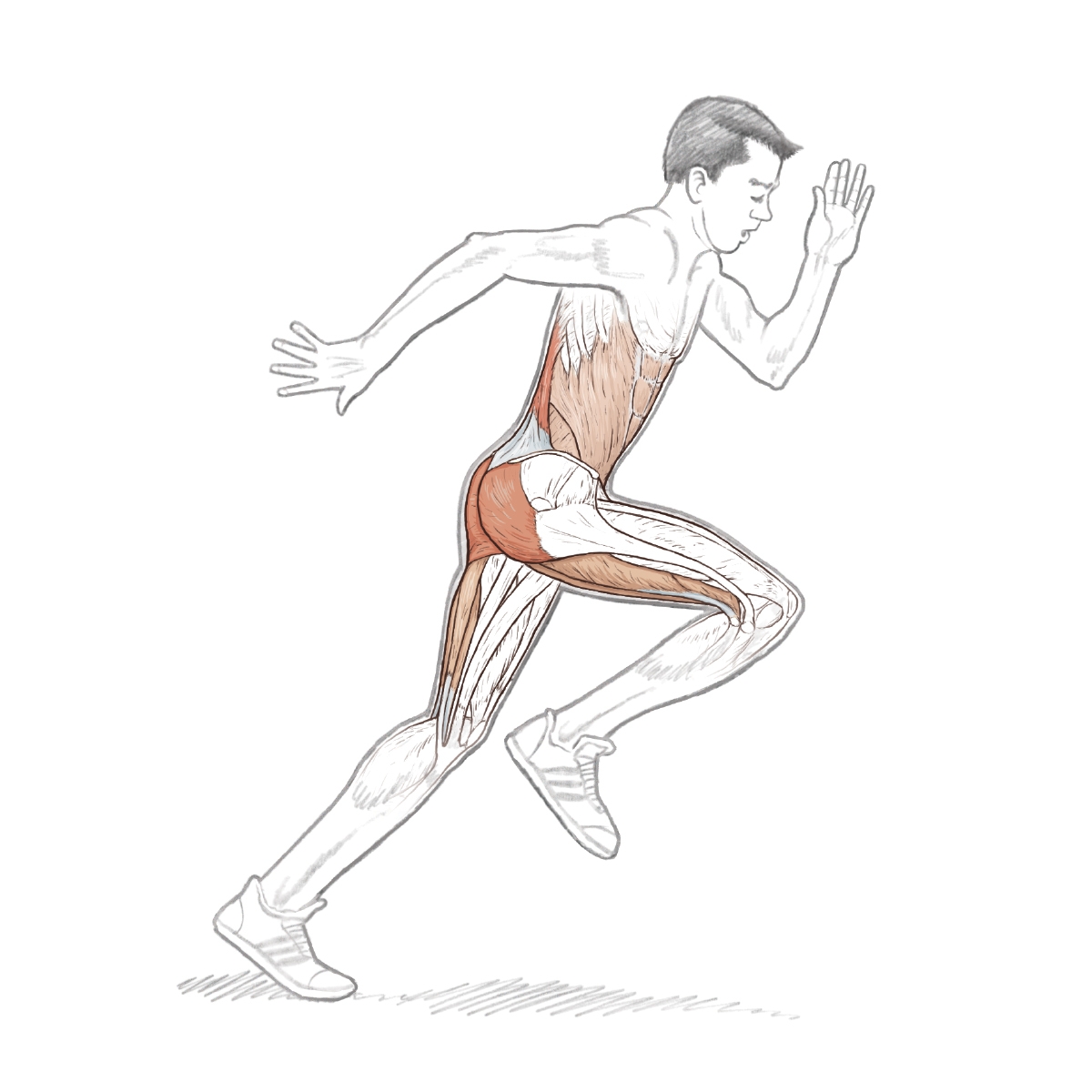 Lumbar hyperextensions can be performed in many ways, but the goal remains the same: to both strengthen and stretch the muscles of the lower back, the glutes, and to a lesser extent the abdominals, in order to help provide the appropriate pelvic tilt during the running gait cycle. A misaligned pelvis causes a chain reaction of misalignment that results in poor running form and wasted energy. To avoid this pitfall, the muscles of the back, the abdominals, and the glutes must not only work in unison, but also work to balance each other while still generating enough strength to perform the exercise. This dynamic is very similar to the way in which the core works during running. Because the pelvis rotates and twists, the core must stabilise dynamically by reacting to terrain shifts, turns and missteps.

The above extract and illustrations are from Running Anatomy by Puleo and Milroy. Human Kinetics has published a vast array of books to help runners become faster. To view the titles, click here: https://humankinetics.me/2018/07/06/11-best-running-books/