The many faces of Parkinson’s

Home » The many faces of Parkinson’s

Tim Webster introduces you to some of his clients who have Parkinson’s and their challenges.

Parkinson’s is a progressive condition caused by a depletion of dopamine in the brain. As with many neurological conditions, Parkinson’s iterations are many and varied. Here I will give you an insight into some of the challenges; my stories are factually correct but the names have been changed.

One in, all in

For a while last year, I was dealing with the fallout from a marital dispute between a wife with Parkinson’s who got vaccinated and a husband without Parkinson’s who didn’t.

That would have been OK had he not come to the somewhat incomprehensible conclusion that I had brainwashed her into putting Parkinson’s classes ahead of him. The fun and games that ensued and the concomitant stress they produced threw her Parkinson’s into overdrive.

The matter was ultimately resolved when I was able to sit down with said husband and explain how his wife’s condition was likely to play out over the coming years and why, therefore, she was training the proverbial house down.

Parkinson’s is a couple’s thing; when one partner gets it, both partners get it.

Then there was my ex-army buddy who, having done two tours of Iraq, noticed he had developed a persistent tremor while working as a rugby coach in Brazil. This was before I started working with neurological conditions, but I had read an article about how dance could improve Parkinson’s, so I called a dance teacher friend and asked if he could help.

The two met in the changing rooms of the local rugby club in the middle of winter (not the dance teacher’s choice, needless to say). Anyway, think John Wayne meets Graham Norton in a Siberian prison and you’ve got the picture. Five years on, and still together, the odd couple has featured in magazines, appeared on TV and, best of all, got Parkinson’s under control.

Gary was diagnosed with Parkinson’s 20 years ago and is still running around like a two year old. That’s the problem: his Parkinson’s can cause him to shorten his stride, increase cadence and lean forward, which results in a runaway train with limited braking.

One mishap led him to run into a brick wall with arms outstretched for protection, which in turn yielded a shattered humerus and serious nerve damage.

By the way, this is the same man who lost more than £50,000 as a result of a gambling addiction acquired as a consequence of taking Ropinirole, which is a dopamine agonist used to treat Parkinson’s. Suffice to say that Ropinirole is now off the menu for him.

He has exercised under the care of a personal trainer for many years and, while the PT did a great job of keeping him fit, he did very little work on his Parkinson’s. Now a better-informed Gary uses high-intensity exercise to pump his heart rate up (and produce Brain Derived Neurotrophic Factor, aka ‘Miracle Gro’ for the brain) and then strips in work on big movements, balance, agility, co-ordination and so on.

Dyskinesia is characterised by uncontrolled movement (writhing) that is almost always the result of long-term use of the primary Parkinson’s medication, levodopa.

Now in his late sixties, Mal used to be a low-single-figures handicap golfer. You might think that uncontrolled movements would do nothing for his golf game but, when he stands over a golf ball, he is completely still. His handicap is increasing but that’s more a function of advancing years and the odd bout of hypotension, which makes him so dizzy he can’t actually see the ball.

Dyskinesia combined with low blood pressure presents some challenges for Mal and myself in a class that needs me to have eyes in the back of my head at the best of times, but I’ve learned to read the signs and as soon as I tell him to ‘step out and settle down’ he does just that.

In addition to Parkinson’s, Sonia has diabetes, she’s osteopaenic and she has significant low back issues. She hates exercise with a passion but, having received a Parkinson’s diagnosis relatively young (early fifties), she knows she doesn’t have the luxury of ignoring it.

Every week she turns up at our high-intensity class, every week she smashes it, and every week she finds a million reasons why she won’t be back the following week, whereupon the cycle starts all over again.

A high achiever who’s used to being in charge, Sonia is having trouble figuring out why all of this is happening to her, and even more trouble accepting it. She keeps on turning up to classes because she knows it’s the only way she can get any control over the disease.

Does she ever get down? Hell yes, she experiences regular bouts of anxiety, as do many Parkinson’s people – think about the role of dopamine in modulating mood and the connection with Parkinson’s becomes clear – but she finds that exercise helps to beat the blues.

Graham and Peter are both retired architects. Graham isn’t the most co-ordinated individual, but his gentle manner and sense of fun endear him to everyone in our less-intense classes. The disease is progressing, as it does, but he’s still handling the physical demands; what he’s not handling is the onset of dementia, which makes understanding instructions challenging. Fortunately, he has a highly supportive wife who is now beginning to act as his ‘corner man’ in classes (i.e., she points him in the right direction and makes sure he does what he’s supposed to be doing).

Peter, on the other hand, is mentally sharp but he struggles with vocal volume and the stoop that often characterise Parkinson’s. That is until recently when his posture has become more upright, to the extent that we have pronounced him to be a modern miracle. When asked how this had occurred, his wife said that he had decided to actually do the band exercises I had given him a year ago, and he had started to tell himself to stand up straight, thus effectively cuing himself.

I usually have to interrupt Neil’s daily call to his stockbroker in order to start the class. This is pretty much always accompanied by a pained look of disgruntlement followed by the boyish smile that has got him into (and out of) a lot of trouble during his 70-odd years.

Most Parkinson’s people experience a smallness of movement, voice, handwriting and so on, but this is somehow more poignant in a man who, for most of his life, has been larger-than-life. But here’s the thing: he accepted Parkinson’s a long time ago, he exercises religiously (if not always all that hard), he enjoys the company of others and he makes a small fortune on the markets. Is he happy? As far as I can tell, he’s ecstatic.

There’s nothing special about what I do; I’m probably less skilled as an exercise professional than you are. I’m just quite good at embracing the chaos that Parkinson’s presents and adapting multiple exercise and activity modalities to meet it. 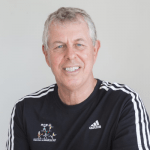 Tim Webster is the co-founder of Exercise as Medicine NZ, Tim is qualified with PD Warrior and Counterpunch for Parkinson’s and he is the author of the Parkinson’s for Exercise Professionals course. He is certified in Cardiac Rehabilitation Phase IV, Functional Rehabilitation and Exercise After Stroke (The ARNI Institute), Brain Fit for Life (Mental Acuity), Multiple Sclerosis Pro and Exercise for Prostate Cancer.
Tim has presented at conferences around the world and he has been the recipient of the UK health and fitness industry’s Lifetime Achievement Award.