Olympian Ron Hill is living with dementia but determined to make a difference. His story could inspire you to start fundraising through fitness.

Ron Hill, a 79-year-old former Commonwealth and European champion, hopes to inspire other people who are living with dementia and has vowed to fight the condition with the same determination that turned him into a three-times Olympian, the first Briton to win the Boston Marathon and a gold medal-winner in the 1970 Commonwealth Games in a then world-record time of two hours, nine minutes and 28 seconds. 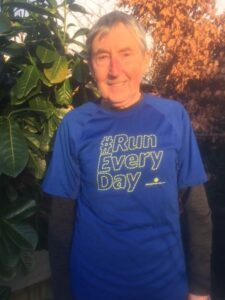 Ron says, “Dementia is the biggest challenge of my life but it isn’t the end of the road by any stretch of the imagination. So I’ll cheerfully carry on keeping active and, hopefully, this will give other people the impression that dementia is nothing to be frightened by and that there shouldn’t be any stigma attached to it.”

Ron will be guest of honour at the OMC Motor Group Ron Hill Accrington 10k & Fun Run on Sunday 22 April. It will see money donated to the Alzheimer’s Society, the UK’s leading dementia charity, which works tirelessly to challenge perceptions, fund research to find a cure and improve care and support for those affected. According to the Alzheimer’s Society, there are 850,000 people with dementia in the UK – and this number is set to rise to one million by 2021.

Alzheimer’s Society chief executive Jeremy Hughes believes Ron’s positive mindset will inspire others to unite and take action against dementia. “Dementia is the biggest health challenge facing society and no one should have to face it alone. But Ron is showing that people with dementia can be empowered to live a life they love after a diagnosis with the support of family, friends and people across our communities uniting against dementia.”

How to run a fundraising event

If Ron’s story inspires you to want to make a difference and raise some money for a good cause, read on for insight from three fitness charity fundraisers on what it takes to run a charity event. Could you be inspired to start a campaign?

For her 60th birthday, Julie Brailey asked 60 people to raise at least £600 for the Alzheimer’s Society and the 60 600 Challenge was born. The Brailey family went on to win the Alzheimer Society’s Fundraiser of the Year (Group) Award at the Dementia Friendly Awards 2017.

Julie says, “Out of 10 people at a dinner on New Year’s Eve 2016, eight were directly affected by Alzheimer’s, including me, as my mum died from the disease. So I decided to set up the 60 600 Challenge. We raised more than £85,000 – well over our target. We even had the song A Good Life donated by Sheffield-based, Grammy-nominated Steve Edwards.

“We set the challenge over 12 months to make it easier for people to plan and take part. One of the events was a mass spin class at the Institute of Sport – two sessions with 100 people in each and a team of coaches to lead the class. Another challenger was David Gray, chair of the Sheffield City Trust (SCT) group; he took part in 60 sports across six days, including football with Sheffield United.

“Every challenger set up a JustGiving page and we had a core group of supporters – lots of people will initially say ‘yes’ but people can fall away, so have a conversation about what you’re looking for to make it easier to match skills to tasks. Also, throw away your inhibitions and ask for prizes to support your fundraising – many organisations are happy to help.”

Una Lacey of Formula 4 Fitness ran The Windy Long One, a four-day fundraiser comprising swimming, biking and running to raise money for John van Geest Cancer Research. She is affiliated with UK Athletics.

Una says, “UK Athletics gives me the confidence that I’m putting on a legally robust event. The Windy spanned four days, with different locations for overnight stays. Participants need to know how much they need to pay, what they’re getting for their money, where they need to be and when, how much training they need to do and what kit they need. As an organiser, you need to decide how flexible you’ll be and how you’ll support them through their training and participation.

“I employ an amazing friend for a one-off fee for running events and have volunteers during the race; I pay for their time with food/drink, etc. as often they stand in the cold and dark! For the Windy, I asked relevant businesses for sponsorship of a specific element (e.g., cycling jerseys, swim hats). I gave them options to share the cost with another sponsor. I found the personal touch of a phone call to be most effective and I offered to place company logos on event clothing and social media in return. Thank your sponsors as visibly as possible. As soon as possible after the event, you should have a visible handing over of the cheque, so the sponsors and those who’ve donated see their money has gone where it should.”

Kesha says, “My aim was to encourage people to get screened; all week I handed out the charity’s information packs. I ran one-to-one sessions as usual but without charge; all I asked was they made a small donation to CRY. I was overwhelmed when every client donated their full fee.

“CRY provides me with new ideas for fundraisers and the materials I need (banners, balloons, t-shirts, flyers, etc.). I advertise at least one month in advance, so I get a feel for how many people will attend and give people enough notice. Word of mouth is great but I also find contacting radio stations and newspapers helps, as it reaches out to people who wouldn’t otherwise have heard about your event. I’ve had donations from people who didn’t attend but heard about it in the media. Facebook is an amazing platform for reaching out to people and raising awareness.

“You can help publicise events by letting people know how previous fundraisers went. I wrote articles for local companies who wanted to know about my event, which provided me with support for subsequent events.”

Where to next? Check out our guide to some obstacle challenges ahead.