By FitPro TeamFebruary 15, 2018No Comments 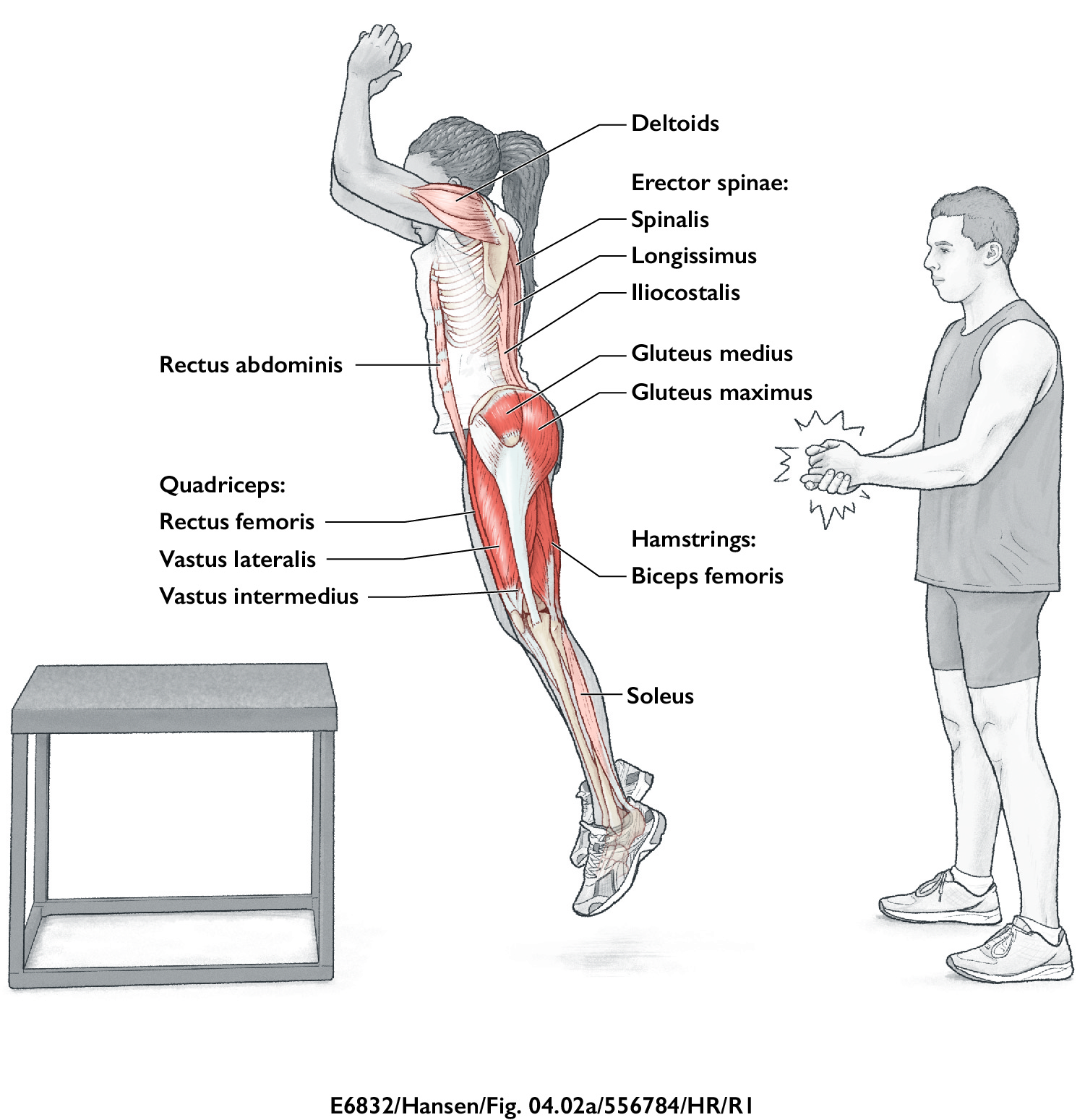 Select a moderate-sized box that is an easily attainable jump height. Start in a quarter squat position in front of the box, similar to the degree of knee flexion used in an athletic stance or ready position. A coach or training partner provides a starting signal in the form of a hand clap, verbal command or movement. At the signal, jump quickly onto the top of the box. The jump motion is similar to that of an unloaded box jump, with an emphasis on explosive extension of the hip, knee and ankle joints. The emphasis on the speed of movement is critical for this exercise. Jump onto the top of the box as quickly as possible with both feet contacting the box surface simultaneously. Step off the box and assume the starting position for another reaction repetition.

Reaction box jumps can be performed with either audible or visual stimuli, allowing you to work on reducing reaction time and rate of force development for an explosive effort. For audible stimuli, a coach or training partner stands behind you and claps, blows a whistle or shouts the command “Up!” (or any other word of choice). Visual stimuli include hand motions, body motions, a ball drop or a flashing light. In some instances, sport-specific audible cues or movements can be used for some sessions, while other sessions include non-specific signals. Variation of stimuli will keep the sessions fresh and ensure focus.

To vary the reaction stimulus beyond visual or audible cues, use a touch stimulus. Before you jump onto a box, a coach or training partner lightly taps your shoulder or low back to prompt the start of an explosive movement. A touch stimulus enhances body awareness and, when combined with an audible signal, conditions a profound response. A touch stimulus can be effective when introduced periodically with more conventional starting cues. 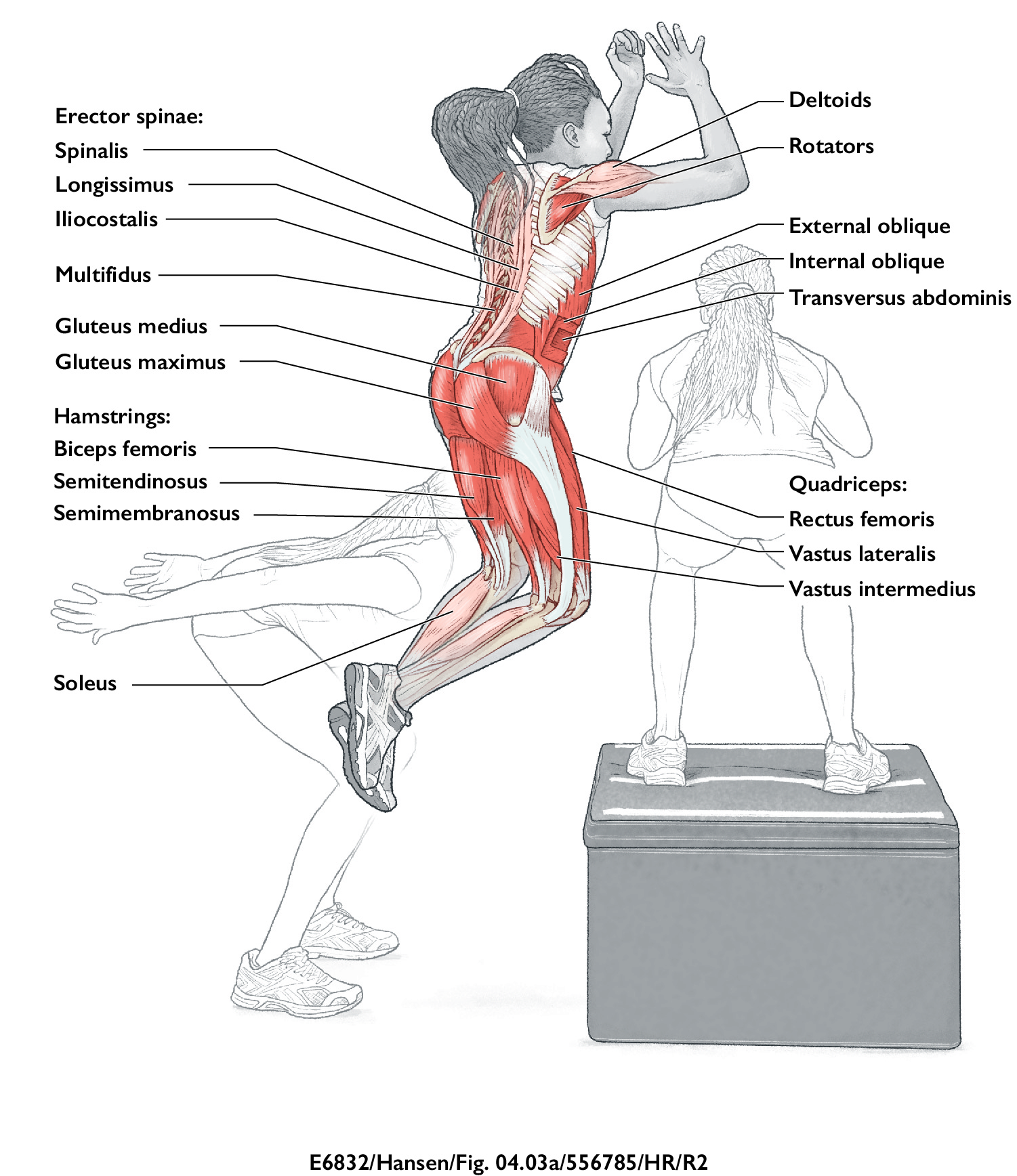 Select a box height that suits your jumping ability. This can be executed as a static start jump or a countermovement jump. Initiate the jump with a strong upward motion delivered primarily by the lower body. An upward arm swing can accompany the lower-body push. The arms, shoulders and head, moving aggressively in the direction of the desired motion, initiate body rotation for the jump. As the upper body and torso rotate, the lower body follows. The magnitude of rotation is determined by the orientation of the upper body. Rotation will be 90-360 degrees, depending on the specifics of the sport. On landing, the upper body faces the direction of the desired finishing position. Landing with the simultaneous contact of both feet on the top of the box provides a stable base of support.

Rotational box jumps combine explosive vertical jumping with exceptional body control and co-ordination. The direction and magnitude of the rotational movement are determined by the actions and intent of the upper body. Simply turning the head and shoulders at the initiation of a jump can create a significant rotational effect. Training this skill is important for all aspects of athletic movement when direction changes and agility are required. The head and upper body act as the steering wheel or rudder of the body. A rotational box jump challenges rotational skill and body awareness. In some sports, such as figure skating and freestyle skiing, rotational box jumps are an important dry-land training exercise for off-season preparation.

Select a box height and degree of rotation within your ability. Rotational box jumps provide an element of complexity that is challenging but also risky if you have not followed an appropriate progression of work preceding the exercise.

Adding a single-leg landing to a rotational box jump provides a challenge that requires strength and stability during direction changes, plus dynamic agility. The dynamic nature of the exercise places significant rotational stresses on the joints of the lower body, particularly when a single-leg landing is required. It is important to train each leg with an equal number of jumps in each direction of rotation. The direction of rotation changes the role of the muscles in the landing leg. If you rotate 90 degrees to the left during a box jump, landing on the left leg places a greater emphasis on the vastus medialis and adductors. Landing on the right leg after rotating to the left requires greater involvement of the vastus lateralis, gluteus maximus and gluteus medius. A comprehensive review of all of these landing scenarios will ensure that the necessary muscles are prepared for all possible situations. 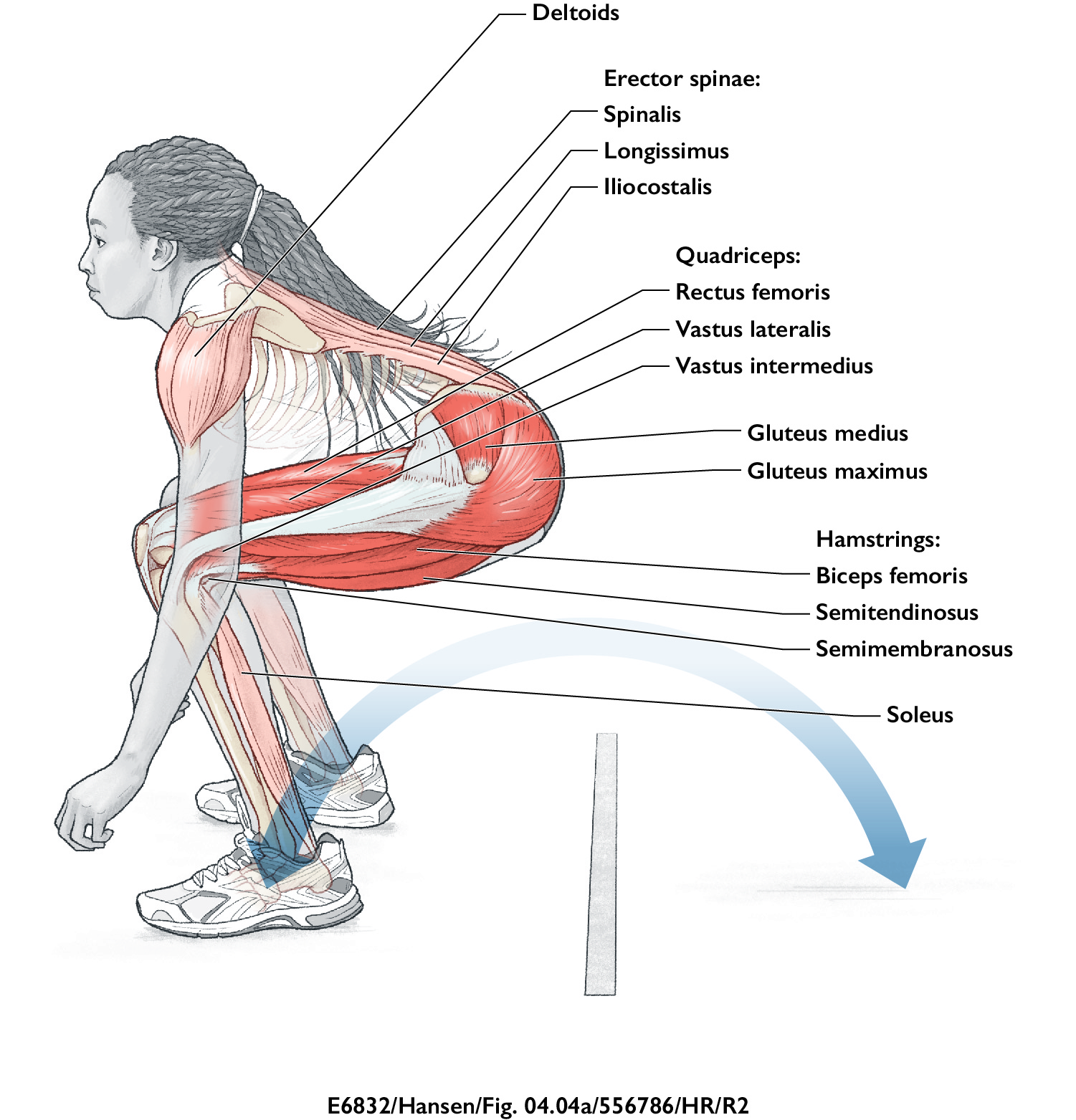 Start with your feet behind a line painted on a court or field surface. Use a countermovement to load the lower body in preparation for an explosive jump up. Squat to a depth no lower than a knee angle of 90 degrees, with the feet shoulder-width apart. The arms gather to accompany the legs in the development of force. Jumping for maximal height is the goal, with slight horizontal travel forward to ensure you pass completely to the other side of the line. Preparation for ground contact allows a strong and stable effort to perform another jump back to the other side of the line.

On landing, the balls of the feet make contact first, with the heels contacting soon after, with the landing forces distributed evenly through the thighs, buttocks and low back. Quickly initiate another strong jump with a slight horizontal movement backward to pass back over the line. Perform multiple repetitions of these back-and-forth jumps.

A basic line on a field or court surface is useful for defining a tangible, but safe, obstacle to jump across. In the case of squat jumps, the line can be used for defining a safe distance for jumps forward and back as well as laterally. The use of a line defines an acceptable distance for horizontal deviations for a squat jump. Maintain maximum effort for each vertical jump while incorporating horizontal movement as part of the jump effort. These types of jumps build explosive power while also enhancing athlete co-ordination in multiple planes of movement.

It is common to draw shapes on a floor surface to define horizontal movements in all directions. Jump back and forth over the various sides of a square or hexagon to include different angles of movement. All of these jumps will include a significant maximal vertical component, although you can perform lower jumps for the development of horizontal speed capabilities and reduced ground contact times.

These exercises are an excerpt from Plyometric Anatomy by Derek Hansen and Steve Kennelly published by Human Kinetics and reproduced with permission.  Click here to purchase the complete book.

For further reading on this topic, visit the Human Kinetics blog

Where next?  learn how one ultrarunner found his passion for running while in prison: Running Man