By FitPro TeamFebruary 21, 2019No Comments

On the BBC online this week, it was quoted that a US-based organisation that campaigns for LGBT sportspeople has cut its links with tennis legend Martina Navratilova over comments she made about male-to-female transgender athletes.

The 18-times Grand Slam winner wrote it was ‘cheating’ to allow transgender women to compete in women’s sport as they had unfair physical advantages.

Ilhan Omar, Democratic US Representative, has written to USA Powerlifting asking it to reconsider what she describes as ‘discriminatory and unscientific policy’ regarding transgender participation1. An excerpt from the USA Powerlifting policy 2 showing the point of contention is as follows:

“Through analysis (of) the impact of maturation in the presence of naturally occurring androgens at the level necessary for male development, significant advantages are had, including but not limited to increased body and muscle mass, bone density, bone structure, and connective tissue. These advantages are not eliminated by reduction of serum androgens, such as testosterone, yielding a potential advantage in strength sports such as powerlifting.”

Ilhan Omar cites just one reference in support of her own argument 3. The lead author of the referenced article is psychologist Bethany Jones, PhD. This article, produced as part of her work towards her PhD in transgender health, exists as a ‘systematic review of the literature relating to sport participation and competitive sport policies’. In other words, it is not a research paper looking at any of the many biological, biomechanical or physiological differences that sport participants have by virtue of their sex. The article is in two parts and looks at: i) research articles; and ii) sport governing-body policies. Here’s a screenshot of the eight – yes, just eight – articles reviewed. 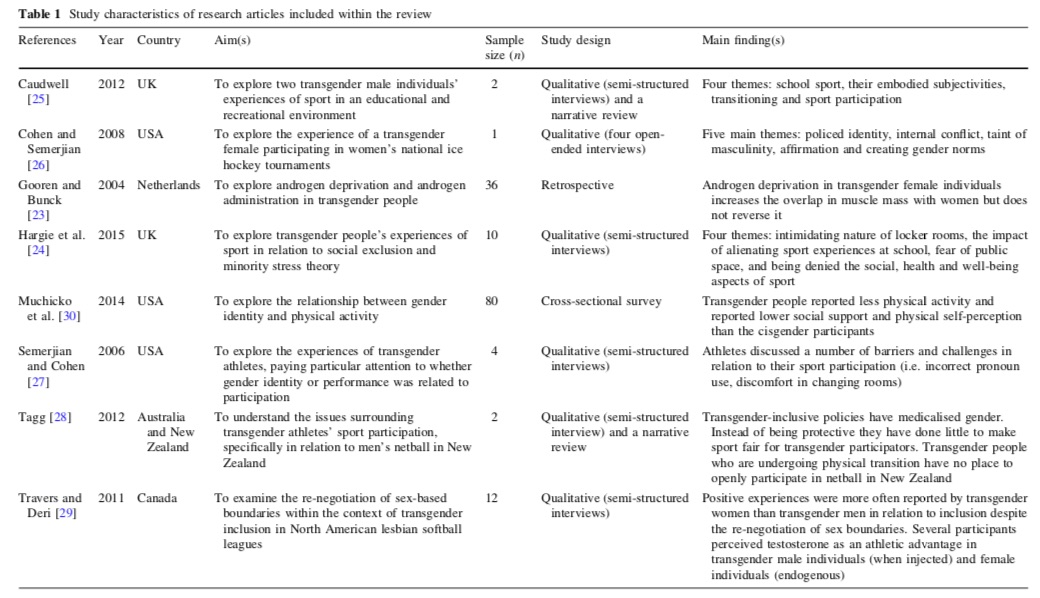 If you look at these studies, you will see that, with one exception, they are qualitative in nature, with most of them being based upon semi-structured interviews. The sample sizes are very small in six of the studies (n = 2; 1; 10; 4; 2; 12). The study with the largest sample size (n = 80) explored the relationship between gender identity and physical activity; in other words, it did not look at any aspects of human applied physiology. There is only one experimental study in the eight studies that comes close to looking at something of biological relevance, namely androgen deprivation and androgen administration in transgender people (although the original researchers referred to transsexuals, not transgender as written by Jones). In summarising this research, Jones et al said, “While this study was the first to explore, experimentally, whether transgender people can compete fairly, the sample size was relatively small (n = 36). Additionally, they did not explore the role of testosterone blockers and did not directly measure the effect cross-sex hormones had on athletic performance.”

Jones et al conclude their review of these eight papers with, “There is limited research from which to draw any conclusion about whether transgender people have an athletic advantage in competitive sport or not.”

Let me juxtapose this statement with that of Ilhan Omar, who you will remember cites Jones’ study in support of her rhetorical ‘scientific’ stance, saying, “The myth that trans women have a direct competitive advantage is not supported by medical science and it continues to stoke fear and violence against one of the most at-risk communities in the world.”

That she has come to a very different conclusion to the one reached by the researcher she cites leads me to several potential conclusions. Firstly, on this simple observation and discounting the possibility of any intention by the Member of Congress to deliberately mislead, I very much doubt that Ilhan Omar read this review. I find myself currently of the opinion that she doesn’t necessarily know what ‘medical science’ means, and I am left doubting that she appreciates the difference between observational and experimental studies, and the concept of hierarchies of evidence. I would further be surprised if she understands that there is good and bad science, and hence what ‘unscientific’ means.

Furthermore, and on the evidence of her letter and the speed at which it was published, there appears to have been no attempt at rational, carefully considered and in-depth research accompanied by critical thinking and reasoning. Indeed, it would be easy for cynics to come to the conclusion that, in also writing to Minnesota Attorney General Keith Ellison, ‘with a recommendation that he investigate this discriminatory behaviour’, she is trying to use her political weight simply to intimidate USA Powerlifting. Her actions could even be interpreted by some as being discriminatory towards women.

As I have written elsewhere, rather than knee-jerk emotional reactions, what this topic needs is good-quality research 4. At the moment, this really doesn’t exist. Of course, what does exist is far more than just the one rather irrelevant and contradictory (to the argument presented) study cited by the Member of Congress. Unlike Ilhan Omar, I have read much of the relevant literature. I also have a background in elite sport, science and medicine. I have no hesitation in saying that this complex and often emotional issue really doesn’t need any more people – however well-intentioned – with no apparent knowledge of the field and no relevant, contextual experience or expertise, wading in with what could be construed by some as political spin, unhelpful bias, or even cynical virtue signalling.

Problematically, what limited research exists invariably focuses on non-elite competitors in endurance sports and seems obsessed with just testosterone values pre- and post-transition 4. It’s almost as if, in some people’s minds, what happens to the body as a result of testosterone in the current 12-month transitioning window for sports participation eligibility, somehow trumps a lifetime of biological sex difference during growth and maturation.

Professor David Page of the Whitehead Institute has carried out ground-breaking work that explains why all the cells in the body – not just those associated with the reproductive systems of women and men – have XX and XY characteristics. In short, his persuasive, evidence-based argument is that fundamental sexual dimorphism exists at the cellular level 5. Others have documented the differences between men and women and the effect of these differences on sport performance in detail 6. For my very small part, I have drawn attention to the fact that male muscle memory likely remains post-transition, and in sports where muscle mass, strength and power make all the difference, it is hard at present to see past this considerable transgender (male to female) advantage4. Perhaps Ilhan Omar can enlighten me.

Good-quality research, followed by sensible, rational debate, with everyone being prepared to change their minds based upon an intelligent review of all the available, good-quality evidence, coupled with the logic of the argument presented, is urgently needed to: a) inform best practice and policy; b) safeguard the health of all athletes; and c) ensure equal rights and fair competition for everyone: male, female and transgender.

This article was originally published on Medium and further articles by this author can be viewed here: https://medium.com/@Antonia_Lee   The article has been shared on FitPro with author permission.