Training and movement in real life

Training is a structured, methodical approach to physical exercise. Fitness professionals plan and organise exercises into a more systematic stimulus, to which, if applied consistently and progressed appropriately, the body can adapt. This is our training session.

In life, and more so in competitive sport, the environment in which we move is erratic and very much out of our control. An evening jog around the block may require an improvised swerve around a car, a small unpredictable jump over a fallen branch, or an abrupt stabilisation of the ankle as you step down a hole. In sport, one day your opponent moves one way, the next, another. The ball bounces towards you one day, another, away from you.

We rarely, if ever, move exactly in the same way more than once. Doing so repetitively would put excessive stress on our body’s tissues and expose them to potential harm. For this reason, our body is structured in such a way that we can perform a given task in a variety of ways, in different environments. “Time-motion analysis studies indicate that even at the highest levels of performance, many athletes do not perform successive movements exactly the same way. In fact, the highest-level performers actually demonstrate a wide variance in movement patterns when executing a play”.1

Athletic movements and activities of daily living are susceptible to the imposed demand of ‘real-time’ motion, which is a reactive, instinctive movement into ‘non-traditional’ body positions as we adjust to the environment. The consequence is a slightly different movement pattern with each subsequent movement demand. This is the contradiction to the training principle of specificity: the movement demands of sport and life are innately variable and often not replicable.2

Taking this into consideration, how can we prevent injury and create an ideal training stimulus to prepare the organism for movement in real life and sport?

Our body’s response and adaptation to load

Wolff’s law describes the remodelling of osseous tissue (bone) in response to the systematic application of mechanical stress. “Bone will adapt to the loads under which it is placed.”3 If loading on a particular bone increases, the bone will remodel itself over time to become stronger to resist that sort of loading.4,5

“Mechanical stress is a measure of internal resistance exhibited by a body or material when external force is applied to it.” In our training this may describe the way our body resists the gravitational force, ground reaction force or from our chosen load, such as a dumbbell, barbell, kettlebell or ViPR. This resistance we create is either manifested as local, as in the case of single joint exercises, or global, body-wide tension as in the case of multi-joint exercises.

The same principle is true for soft tissue such as muscle, tendons, ligaments and all other fasciae. This is described in Davis’s law, a physiological principal explaining how soft tissue remodels along lines of stress. The adaptation that the tissue experiences is specific to the manner in which it is mechanically stressed and, hence, soft tissue is a product of its environment.

Skeletal muscle in particular “is able not only to increase its mass as an adaptation to mechanical loading, but also to regenerate after damage, via its intrinsic regulation of gene transcription.”6

Skeletal muscle tissue achieves this through a process called mechanotransduction, “a process whereby cells convert the physical forces in their environment into an appropriate response”.7 Bone, soft tissue (including tendons, ligaments and all other fasciae) and muscle are all able to create positive adaptations to the deliberate and systematic application of mechanical tension. It is, thus, quite apparent that we need to move, and move with load in order to strengthen our bodies!

How should we move?

Isotonic machines are very common and make up the vast majority of equipment we find in the gym. These machines allow us to target certain muscles through a specific and controlled range of motion. Isotonic movement involves the overcoming of resistance during the concentric phase, where the muscles shorten to produce movement and then succumb to the resistance by lengthening under mechanical tension during the eccentric phase. Isotonic muscular contraction against resistance creates favourable muscular adaptations such as increase in size and strength. But does it have a positive crossover to life and sport?

The limit to this style of classic resistance-training exercise is that it isolates the contractile element of the muscle to generate forces. During functional movements, such as those we see in life and sport, it is the non-contractile, elastic component of the fascia and connective tissue responsible for generating the forces that produce movement. This is especially true during higher intensity dynamic movements. “Muscles are actually required to contract isometrically (to not shorten nor lengthen), where the fibres of the contractile element tighten to create tension in the elastic component as it stores mechanical energy during lengthening. This energy is then released when the passive, connective tissue returns to its normal resting length.”8

This return of energy is essentially ‘free’ as it does not require the binding and cross bridging of actin and myosin filaments to contract and shorten muscle. Our skin, fascia, tendons and ligaments are often overlooked as trainable, adaptable tissues but they are of paramount importance when looking to best prepare the body for optimal performance. They are capable of capturing and returning energy. They do not require metabolic energy, such as ATP (adenosine triphosphate), as in the case of muscles. The body is aware of this and self-organises, by means of the neuromuscular system, to find the most economical movement solution to perform the given task. Consequently, the body often tries to use as little muscular energy as possible to maximise the efficiency of our movement and take advantage of the free return of kinetic energy available from the inherently visco-elastic fascia. “The emphasis on strengthening the contractile element of the tissue rather than the elastic component could lead to potential injuries when an individual has to perform rapid movements or changes of speed.”9

What happens when we resist more than one direction of force entering our body?

Moving a load through different ‘triangulations’ sends force throughout the body in many different angles, fortifying tissues and placing a greater demand on the nervous system to learn the task (motor learning/neuroplasticity). Essentially, the tissues remodel themselves in a morass (myriad different directions) to create greater resiliency to innumerable sources of mechanical load.

When there is more than a single force vector, force enters our body from various angulations and directions as well as different sources, such as gravitational, ground reaction and, of course, the external load. We can manipulate the way in which our bodies resist these forces by modifying the way we stand, the direction in which we move, the way we hold an external load and the speed at which we move. Training possibilities become numerous and positive adaptations limitless.

What does this look like and how can we apply it to our training?

Let’s look at an example of loaded movement training (LMT) in practice. More precisely, let’s explore the different ways we can strengthen the hamstring and reinforce the tissue of the posterior thigh with LMT. A hip hinge is an ideal movement to lengthen (under load) the tissues of the superficial back line and stress the bi-articulate hamstrings. Flexion at the hip is accompanied by relative extension at the knee and consequentially the hamstring is put under stress. It is also the position from which hip extension begins in the open chain during the running cycle, just prior to foot strike, and is thus, an ideal exercise for improving athletic performance. 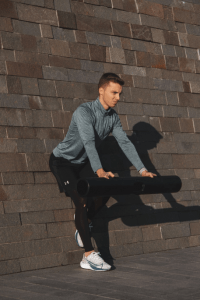 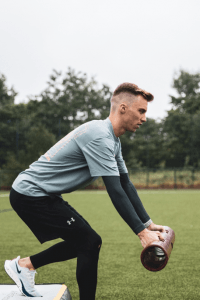 The hip hinge can be effectively performed strictly in the sagittal plane, as in the previous photos, or we can spice it up with some thoracic rotation in the transverse plane! These movements now look a little more authentic! The position we find ourselves in is similar to that of bending down and reaching across the body to get something out of the cupboard or cutting and changing direction on the football pitch. All of a sudden, we ask more of the neuromuscular system to stabilise and create smooth, rhythmic movement and we begin to reinforce tissue in authentic ways that lead to a superior training adaptation. 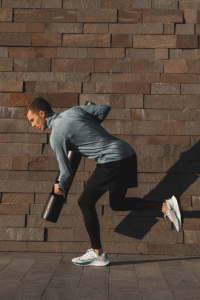 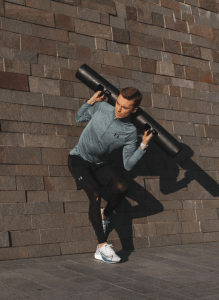 We are truly an incredible organism that can learn from, and effectively adapt to, our environment to obtain greater success from whatever it is that we do most. Let our training reflect this, our body’s incredible capacity to learn and move. Train our muscles in the way they are required to function during bipedal movement and stimulate neuromuscular adaptation that has a positive influence on our daily movement and athletic capacity. Create superior tissue resiliency to erratic, chaotic mechanical tension through triangulation and loaded movement training. Our training possibilities are numerous and positive adaptations endless. 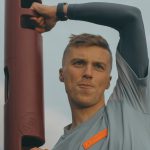 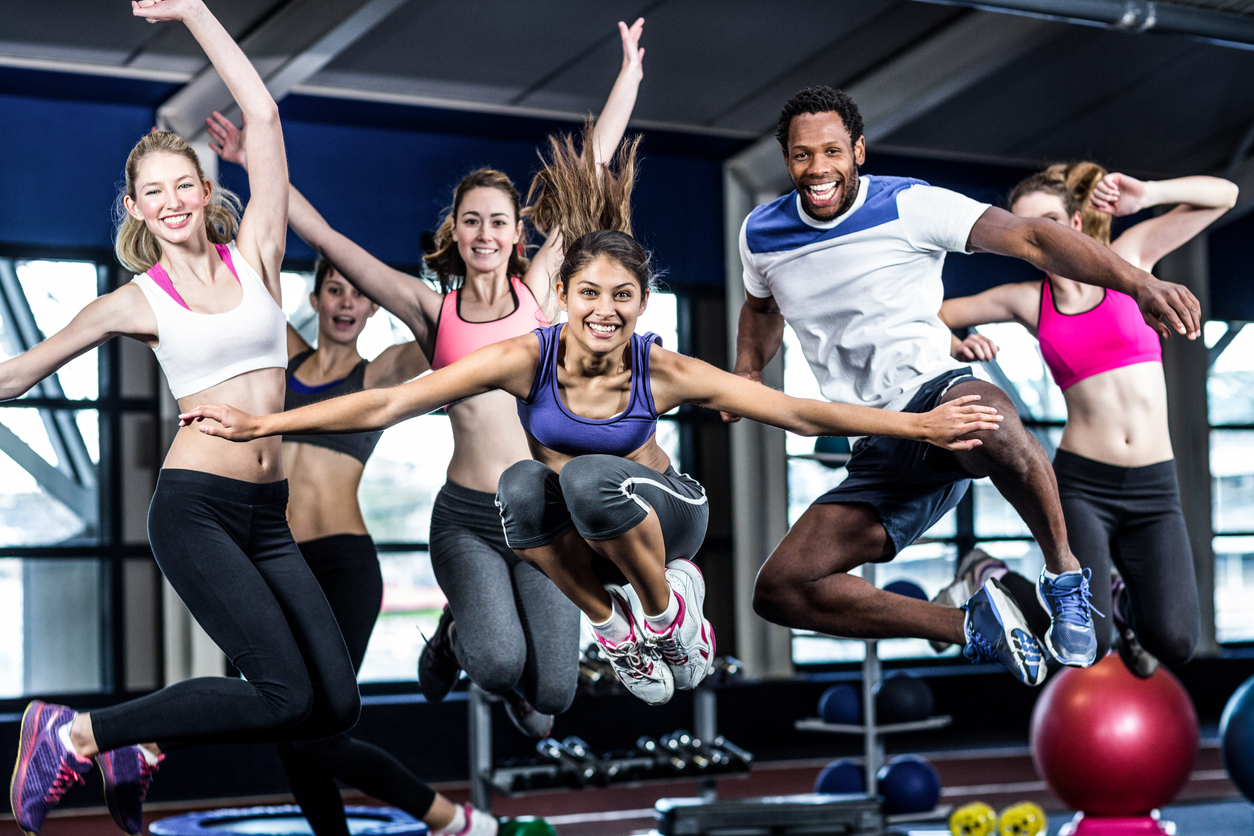