By FitPro TeamFebruary 6, 2019No Comments

In recent years, we have seen a growing awareness of the therapeutic benefits of going for a run. The cliché tells us that the only bad run is the one you don’t go on. For thousands of people, it’s much more dramatic than that; just putting their running kit on and getting out of the door can be, quite simply, a life-saver.

For people in times of crisis, trauma and physical or mental illness, running is often the means by which they reconstruct a fractured, fragmented identity – or indeed create the means to a new identity. When normality collapses, running can help put it back together again. In the very worst cases, it can actually create a new normality and offer us the chance to move on.

Phil Hewitt, bestselling author of Keep on Running: The High and Lows of a Marathon Addict, is, regrettably, well-qualified to write this book as he has actually been there. In February 2016, Phil was viciously mugged in South Africa where he suffered stab wounds, broken ribs and abdominal injuries, and was effectively left for dead in a grim Cape Town suburb.

With 30 marathons already under his belt, in the first few weeks after the attack, even though he could barely walk and was suffering acute symptoms of post-traumatic stress disorder, inevitably it was running that Phil turned to. While he couldn’t make any sense of what had happened to him, he knew that dedicating himself to running – and its possible healing powers – was the only route ahead.

Although the author’s experiences are not the subject of this book, they certainly informed his approach to it, as Phil looks at runners who have suffered similar, or worse, in a wide range of scenarios.

Listen to Phil’s account first-hand as he shares his story with FitPro readers. 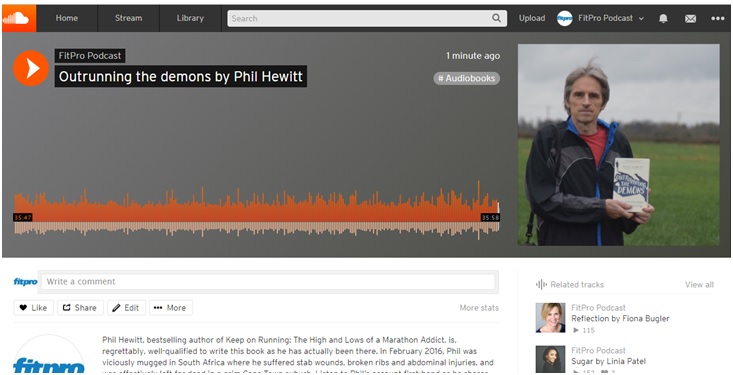 *This interview was conducted via the telephone – with Phil based in Chichester.

What does running mean to you? Would you like to speak on a subject on the podcast, or perhaps you have something to say in response to this interview. Get in touch with us at: publish@fitpro.com and join the conversation over on our Facebook page:  https://www.facebook.com/fitproltd/