Are you an active couch potato or an active non-exerciser?

Home » Are you an active couch potato or an active non-exerciser?

An ‘active couch potato’ is a person who sits for up to 9-10 hours of the waking day and yet still goes to the gym and performs moderate to vigorous exercise for at least one hour per day. “Too much sitting is not the same as too little exercise; it is possible to meet the current exercise guidelines to be active and still sit for too long,” advises Dr Paul Batman.

This is extremely controversial, as studies using very sensitive equipment have now supported the idea of sedentary behaviour in active people. In a study reported by Genevieve Healy, subjects accumulated more than 30 minutes of moderate to vigorous activity in the gym, while still spending 71% of their waking time in sedentary activities such as sitting. This indicates that people can be very active yet be highly sedentary and still suffer from its consequences!

Some landmark information now reveals that those fit people who undertake more than 150 minutes of vigorous exercise, still spend more than 60% of their free time in sedentary activities. Based on the new information available, we could be regarded as physically active and fulfilling the national general exercise recommendations, while spending as little as 3% of our waking time performing moderate to vigorous exercise in an exercise environment. The remaining time has been reported in sedentary activity (58%) and light-intensity activity (39%).

The most important point to realise is that, if we are vigilant in going to the gym for an hour every day, this still will not stop or solve the problem of a sedentary lifestyle. It is not just about doing intense fitness activities for one hour per day, it is about changing our lifestyle to move throughout the day as much as possible at a low to moderate intensity. If we performed 60-70% of our waking hours in low- to moderate-intensity activity areas, such as domestic, occupational, transportation, etc., and 20-30% in sedentary activity without any vigorous exercise activity, we can still be regarded as active, producing significant reductions in risk factors. We have now become an ‘active non-exerciser’.

While this profile is quite common, its impact and benefits have received little attention. In combination with the current formal exercise recommendations, people who accumulate movement during the day within small time frames of multiple muscle contractions make significant impacts on energy expenditure.

NEAT/NEPA could be any low- to moderate-intensity movements that are not structured into a formal exercise programme. To demonstrate the importance, if we ‘walked and worked’ for half of the working day and weighed 70kg, we would expend an additional 100Kcal per hour, which over a working day could translate into 400Kcal per day – a weekly energy deficit of 2,000Kcal, a monthly deficit of 8,000Kcal, and weight loss over 12 months of more than 13kg. Without any other activity-based intervention, it is possible to lose in excess of 12kg of bodyweight per year with very little change in normal behaviour. If additional movement was employed during leisure time, home time, and travelling to and from work, greater significant changes to bodyweight could be made without additional financial cost and time. The Australian Longitudinal Study on Women’s Health, which has been gathering information since 1996, reveals that younger women who sat for more than eight hours a day, weighed 3.40kg more than those who sat less than three hours a day. Each additional hour of sitting was associated with 227g of weight gain.

Our society’s interaction with its current environment promotes labour-saving sedentary behaviour and the convenience of eating in combination, which are powerful forces. The first step in gaining improved health is to create opportunities to move in our already existing environment to the point where output can at least match energy intake. Opportunities have to be created in our home (with transport variations), in our workplace, and during our leisure time for additional movement to be performed at a comfortable variable intensity in multiple bouts, which can be maintained at a moderate level of intensity.

We need to treat moving as an opportunity rather than an inconvenience. We have to become more active at a low to moderate intensity for at least 9-10 hours of a 16-hour waking day. We need to create an environment for constant postural change from sitting to standing, to walking to sitting; breaks in sitting time can have beneficial effects on our metabolic health. In another study by Healey (2008), those subjects who interrupted their sitting time by transitioning to standing or walking short distances were regarded as ‘breakers’ and demonstrated a reversal of many of the side effects of sedentary behaviour.

The other subjects who remained in a sitting position were regarded as ‘prolongers’ and continued to show detrimental effects of sedentary behaviour. Become a breaker, not a prolonger! These results were independent of performing moderate to vigorous exercise. Remember that standing and walking for one minute in 30 minutes can result in an additional 3Kcal of energy expended. Taken over a full five-day week or eight hours per day, if we stood and walked for one minute every hour we would effectively expend an additional 120Kcal per week compared to our work colleagues who sit for the same period. If we chose to stand and move at a self-selected pace for two minutes per hour, per day, per week, it would result in 296Kcal expended per week. A significant 660Kcal would be expended if we stood and moved for five minutes per hour, per day, per week. Based on this information, if we stand and walk at work/home for five minutes per hour for eight hours, five days per week for at least 50 weeks, we could expend an additional 33,000Kcal or 5kg, keeping all other aspects of life constant, and so on… 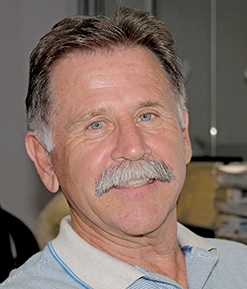 Dr Paul Batman has been involved in health and fitness for more than 40 years as a university lecturer, vocational educator, author, researcher, international conference presenter and workshop facilitator. Over the last 18 years, Paul has built, owned, operated and sold two leading health and fitness vocational training institutes, and recently received a Lifetime Achievement award for his services to the Australian Fitness Industry.