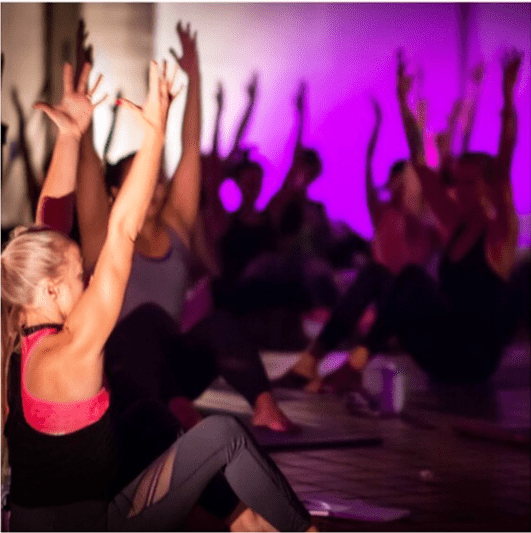 By FitPro TeamOctober 21, 2016No Comments

FitPro went along to Fat Buddha Yoga’s #BeatBreastCancer Jam to get a taste of FBY’s vision and to contribute to a great cause.*

The room is dimly lit with fairy lights and a purple ambient hue, a hum of chatter echoes with relaxed beats playing in the background. Hosted in the ever-trendy Old Truman Brewery on Brick Lane, Fat Buddha Yoga has definitely got its target market set out.

The class opens with a brief chat from Calli Sparrow who leads the session, where she explains who she is, what is going to happen, who the event is for and, most notably, to remember to have fun.

Although hard to hear at times, the class was dynamic and kept things simple, upbeat and definitely not serious. Calli and FBY’s vision comes through in her use of language, encouragement and simple moves, but with plenty of options to make postures harder if you want to.

From a mindfulness perspective, you can tell that Calli is tapping into the 20-somethings, with plenty of sighs and silly noises throughout to loosen everyone up and let go of any stiffness within them. It’s these added twists that set FBY apart from other yoga classes – the lack of pressure to feel engaged with a sense of spirituality leaves room to focus on the present and just enjoying your practise and the music.

While it is evident that FBY is not seeking a spiritual aspect to its classes, mindfulness is still prevalent; along with the sighs and the silly noises there is an encouragement to let energy leave your body and to send joy elsewhere, particularly to those in less fortunate positions.

A personal favourite was a move called ‘beetle’s last rave’, which consisted of lying on your back, arms and legs raised and wiggling without any inhibition, and pretending you are a beetle at your very last rave. A simple exercise that enabled everyone to let loose and feel relaxed enough to let go.

I was lucky enough to catch up with the woman behind FBY, Jessica Skye.

What was your inspiration behind Fat Buddha Yoga?
I always knew I wanted to run pop-ups and provide something that was affordable, as yoga can be such an expensive hobby. The inspo for FBY grew very organically – I wanted to create something different to what was currently available. I was already DJ-ing, so music would be a huge part of the experience, and the rest just fell into place. The approach is authentic to me and is aimed at the modern urban yogi: non-preachy; good vibes; good fun; and a mind and body balancing experience.

How do your classes tie into traditional practice? Do you think there is a big difference between your classes and studio classes in terms of what participants gain physically?
FBY is a modern approach to the ancient art and science of yoga. There isn’t any chanting or much omming, and there’s no heavy reference to Hindu philosophy that ancient yoga is rooted in. It’s also very physical. FBY definitely breaks the mould on some level – for me, a yoga class was a space that I could escape the nine-to-five perils, take mental downtime, learn to meditate using movement to help me gain clarity and perspective, rebalance my energy, de-stress, physically balance my body, release endorphins and, most of all, have fun.

It’s not meant to be serious, pretentious or too hippy dippy. FBY is about getting down and keeping it real on the mat. Runners come to stretch, people use it as a workout, yogis come to the Fire classes to learn new tricks, and everyone can de-stress, decompress and load up on some Zen.

What do participants gain mentally?
They gain mental space; 60 to 90 minutes of tuned-in, focused flow time, immersed in music, ambient lighting, rooftops or panoramic views (where their emails, bosses and partners can’t get them). It’s all about the experience, letting go, having a laugh, getting a good sweat on and leaving feeling better than when you arrived.

Do you incorporate mindfulness and spirituality into your classes?
Yes. Classes are opened with meditation – super, straightforward but effective breathing exercises. Good vibes are raised during the practice, mindfulness is emphasised mentally and physically through the classes, and the spiritual stuff is really down to the practitioner. Their faith, beliefs, attitude, etc., it’s very personal to them. Some people are very in-tune, some less so, but that’s cool. People are encouraged to take what they need from a class.

Have you received any backlash or disagreements from other practitioners and yogis because of your unique classes?
Not to date. I only hear the positive feedback. I’m sure FBY isn’t everyone’s cup of tea and that’s cool. But, so far, people with less positive feedback have kept it to themselves 🙂

*This event was put together to raise money in aid of beating breast cancer, in particular, a close friend of the organiser’s Rosalie. You can read more about her story and donate here: http://bit.ly/2dUN3Dj