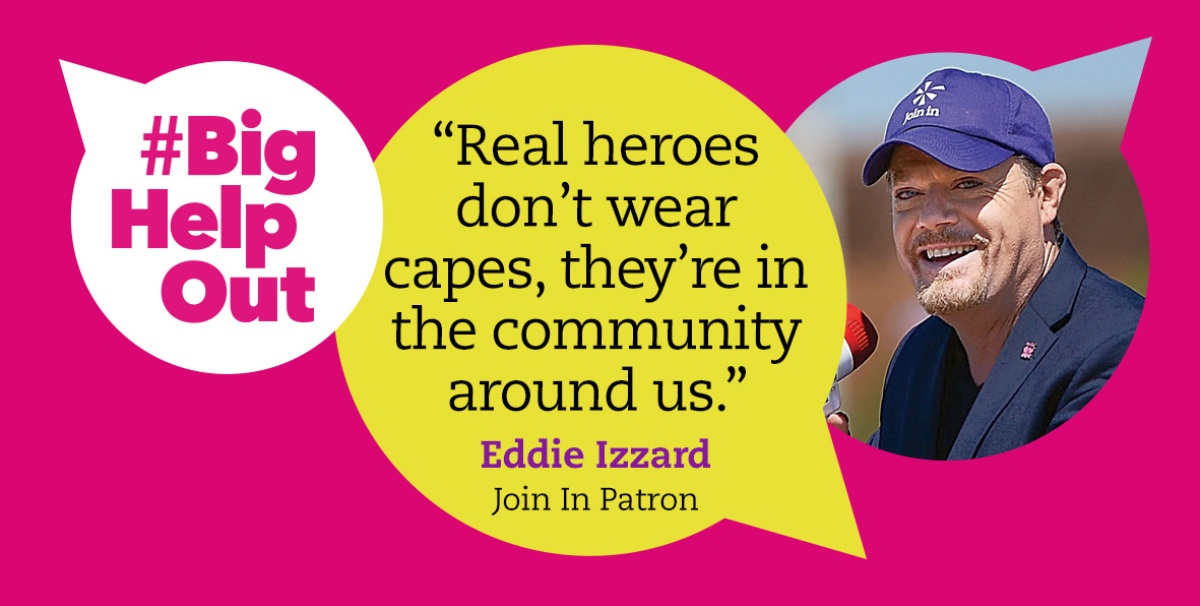 An initiative to inspire 10,000 new volunteers to help out at local sports clubs, groups and events has been launched by sports volunteering charity Join In and BBC Get Inspired.

The campaign was launched this month by Join In patron Eddie Izzard and Baroness Tanni Grey-Thompson, ahead of BBC Sports Personality of the Year 2015, which is set to take place on 20 December in Belfast.

The Big Help Out builds on the success of the inaugural #BigThankYou at BBC Sports Personality of the Year 2014, which saw thousands of sports stars, clubs, players and organisations from across the UK say thanks to volunteers who dedicate their time to grass roots sport and helped to build their career.

Eddie Izzard says, “Real heroes don’t wear capes or masks, they’re in the community around us, helping out at local sports clubs and using their super skills to help with fundraising, coaching, social media and everything else it takes. But it’s not just the players that benefit, these local heroes also feel happier and healthier for helping out.”

Join In’s research shows that every volunteer allows 8.5 additional participants to get active and enjoy community sport. With a target of generating interest from 10,000 new volunteers, Join In and BBC Get Inspired hope to see a significant uptake in new participants involved in sport at their local clubs.

Tanni Grey-Thompson added, “Volunteers have played a vital role in my career – their motivation, dedication and commitment has helped me progress in sport and they continue to help athletes, at every level, to take part in and enjoy sport.”

Barbara Slater, BBC director of sport, commented, “I’m delighted that once again the BBC is partnering with Join In on such a worthwhile initiative. The Get Inspired website now attracts, on average, 1.2 million views a month with more than 350,000 people referred on to partner activities last year alone. We want to use that success to build on 2014’s #BigThankYou campaign and inspire more people to get involved with their local sports communities.”

There are already 3.2 million people who are giving their time for free to enable sport to happen across the UK. Despite this huge effort, 55% of the population still don’t know that sports clubs are run by volunteers, and 7 out of 10 clubs still need more help.

Every year BBC Get Inspired presents the Unsung Hero Award at BBC Sports Personality of the Year, which recognises one individual who has made an outstanding volunteer contribution to sport. Denis Neenan, last year’s BBC Midland Sport’s Unsung Hero, agrees “I have been a volunteer for more than 40 years and I’m still going strong. When I first started I could never have imagined the people I would meet and the places I would go through volunteering. It’s been incredible and if I had the chance to do it all again, I would.”

Signing up is easy, simply log on to joininuk.org/bighelpout