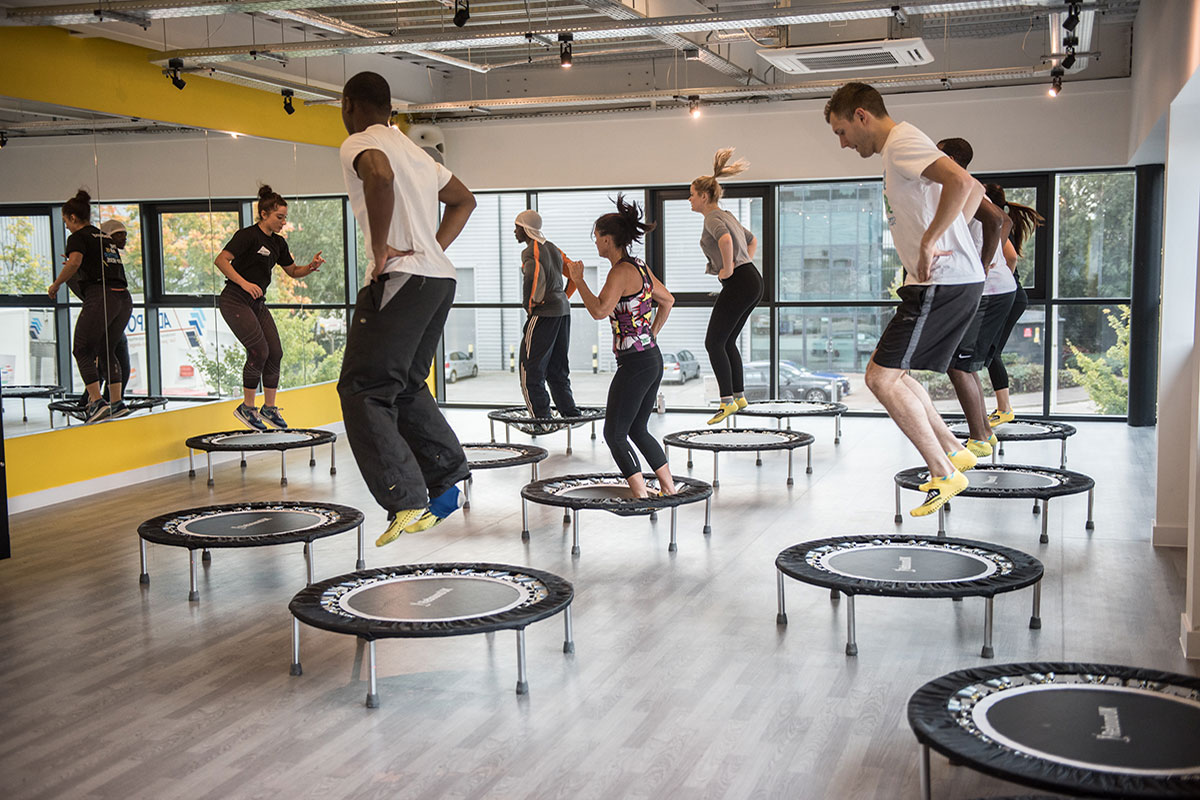 By FitPro TeamOctober 20, 2015No Comments

Everyone is talking about Oxygen Freejumping in West London. Olivia Hubbard shares her experience of the fitness classes, which launched this week.

I remember the day I returned home from school to the beautiful trampoline that awaited my christening bounce. My parents were less than convinced, probably because our garden was on a one-in-three hill and the 12ft frame was positioned alarmingly close to an overhanging apple tree. Nevertheless, I flipped my way through my childhood unscathed and lived outside with equally as enthused friends. With boasts of “Laura has a 14ft one!” and “Yeah, well, mine has green sides,” nothing else mattered. We thought we were gymnasts – we flipped to Britney and landed beneath the tulips.

Who would have thought that a group of young professionals would find themselves in Acton on a Thursday evening, ready to relive those childhood moments (minus the tulips)? Oxygen Freejumping, London’s first trampoline park, has launched Oxygenise this week – a range of fitness classes on the park and in the studio. The park says hello to two innovative classes: Airborne, which takes place on the main park, and Oxygen Rebound, which will be taught in the venue’s dedicated studio. Both classes are to music and last 45-60 minutes, accommodating 12-15 people in each high-intensity session.

The Oxygen Rebound class sees each participant on their own rebounder trampoline and begins with wide stance jumps and repeated choreographed moves. There’s certainly no time to lose concentration as you’re constantly performing jump turns, holding strength as you do so. Following the cardio, the class has you doing stomach crunches, push-ups and triceps dips. Sweat-plastered smiles reflect in the mirrored studio wall and chirpy instructors have an approachable demeanour and ‘high five’ charisma. I think all office workers should do this class over their lunch hour – it’s impossible not to have fun. Besides, surely you would love to see your manager swing their arms around in a similar motion to a small child jumping through a muddy puddle, shouting “weeeeeee!”? 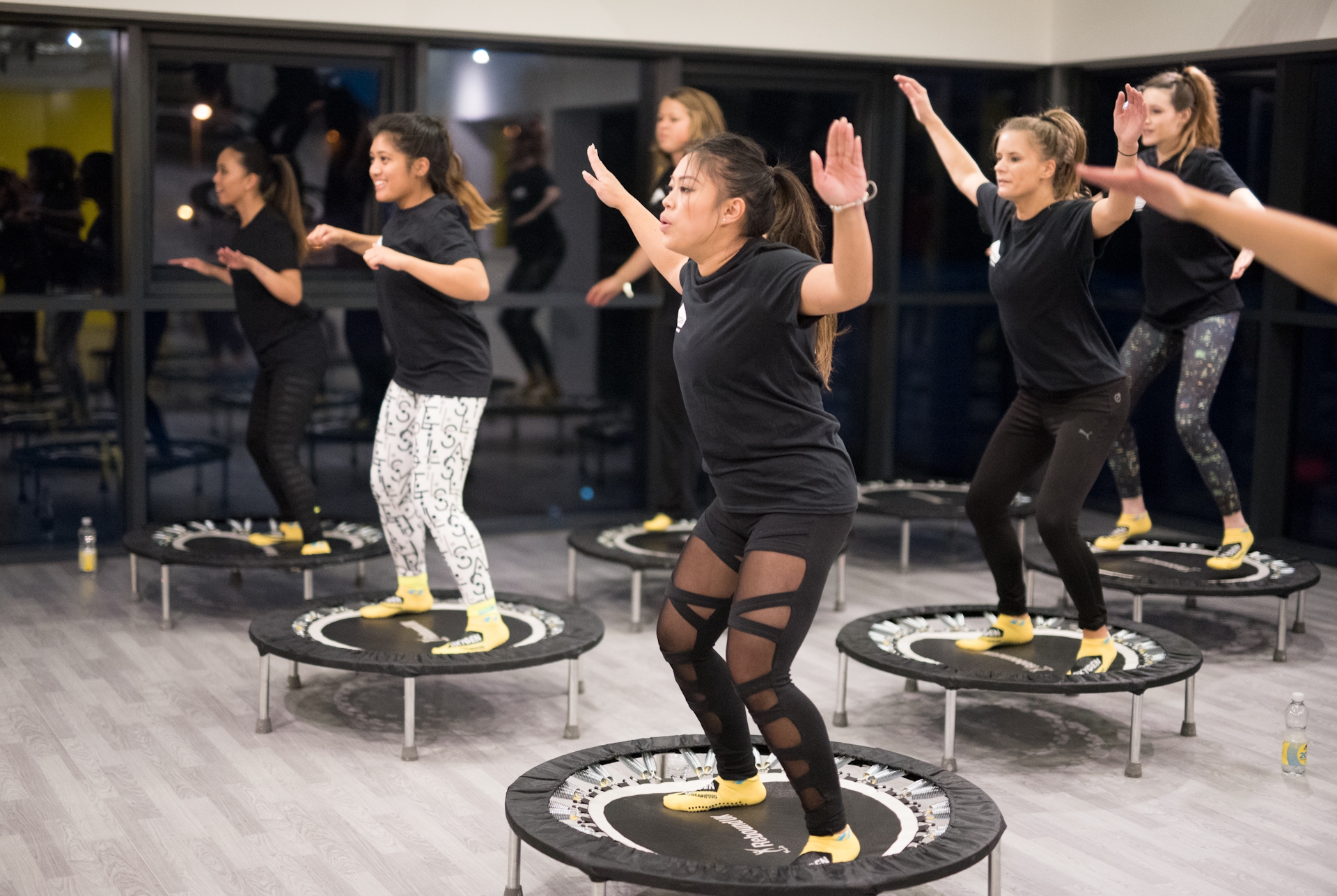 Marina Mallourides, one of the lead fitness instructors at the park, says, “It’s a great way to develop your co-ordination skills, as a number of actions require concentration at the same time: bouncing, balancing, maintaining the body’s position and anticipating the next move.”

After the rebounders, we got the H20 on board before heading over to the Airborne class on the larger trampolines. Entirely cardio, the class saw us jumping as high as we could, performing tucks and pikes and shifting our bodyweight from one end of the trampoline to the other. Incredible. It was exhausting. We even did some planks for good measure and a full cool-down. No one wanted to get off – but play time was over and it was time to go home.

I would heartily recommend the sessions to mix up your fitness week. The huge West London venue, which offers over 27,000sq ft of wall-to-wall trampolines, opened in July. In addition to the new fitness classes, which can be booked for £10, visitors can enjoy hour-long freejumping sessions, including a tumble track, giant air bag, obstacle course, Sebastian Foucan’s Freerunning Academy, Family Bounce sessions, Little O sessions for toddlers, children’s parties and Teen Takeovers.

Oxygen Freejumping founder and former CEO of ukactive David Stalker says, “We’re incredibly excited to be launching our fitness classes at Oxygen Freejumping. I challenge anyone to jump on a trampoline and not smile.” 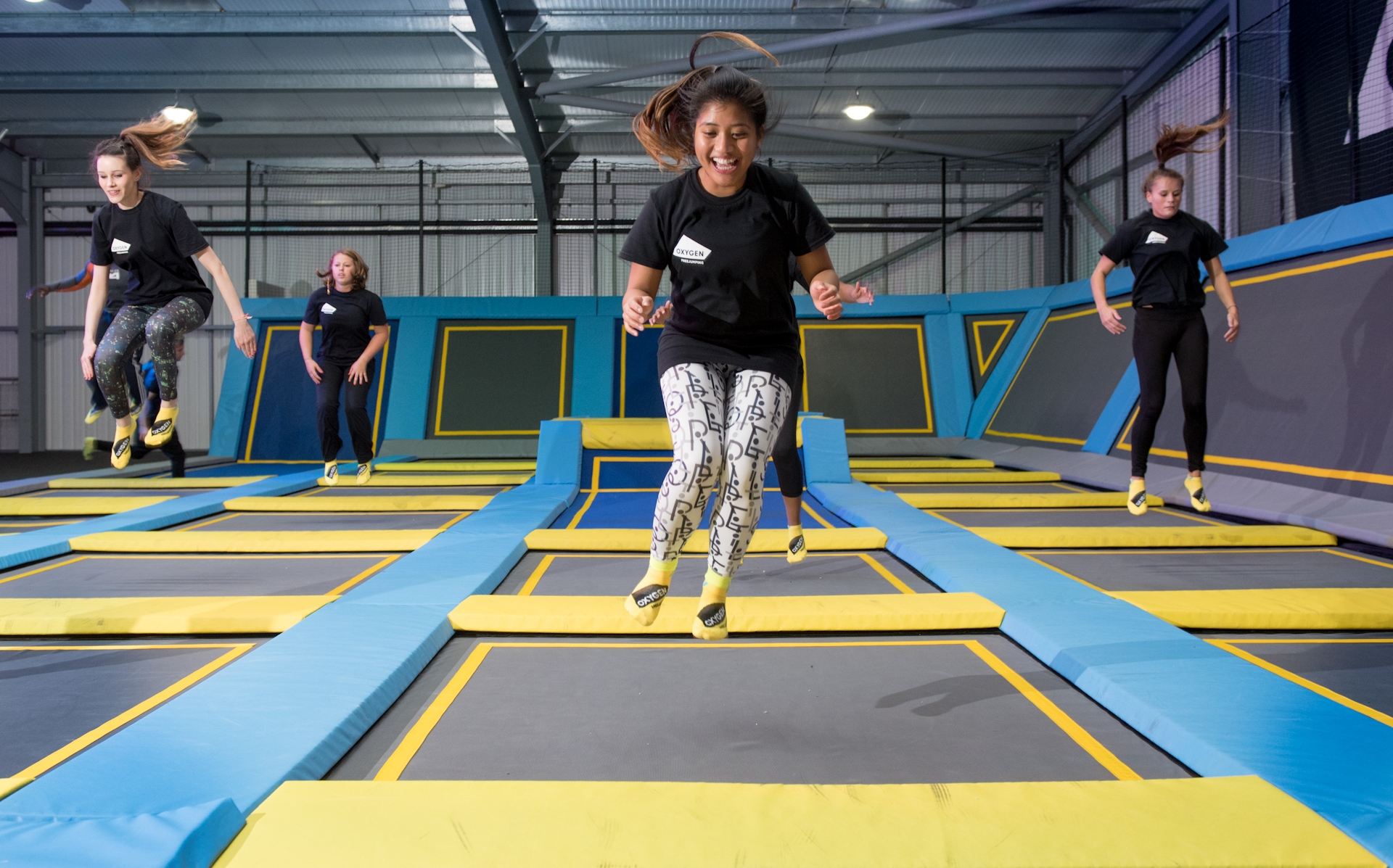 Getting ‘Airborne’ on the larger frames